Inventing the Modern Garden: The Miller House and Garden

The Miller House, designed by Eero Saarinen, has a landmark Modernist garden designed by Dan Kiley. This month, May 2011, the house and garden are opening to the public for tours for the first time in 50 years, allowing visitors to walk through this triumph of mid-century Modern design. By Ted Loos

For more than 50 years, the country's most archetypally Modernist garden has been hidden behind a tight row of arborvitae hedges along Washington Street in Columbus, Indiana, a city of 39,000 people an hour south of Indianapolis. 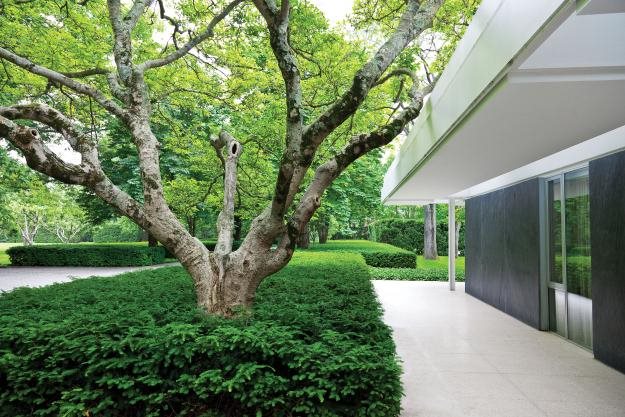 Kiley's garden nearly meets the roofline of architect Eero Saarinen's structure, which in turn uses skylights under the eaves to mediate the transition from inside to out. Photo by: Hadley Fruits/Courtesy of the Indianapolis Museum of Art.

Unless you knew J. Irwin and Xenia Miller, the wealthy art collectors who commissioned it, or were granted rare permission to enter, you have missed what landscaping pioneer Daniel Urban Kiley (1912-2004) considered his best work. His 1955 design for the Miller House grounds was a series of what he called “pinwheeling spaces” that spun outward from a home designed by Finnish architect Eero Saarinen. Though Kiley collaborated with Saarinen on the Gateway Arch in St. Louis and other iconic 20th-century structures, it was at Miller House that the Modernist era in landscape design was born.

In May, the Miller home opens to the public for the first time. For a $20 entry fee, design pilgrims can see how Kiley synthesized the classical 17th-century French designs of his hero André Le Nôtre with the abstraction of minimalist architect Mies van der Rohe, especially Mies's acclaimed Barcelona Pavilion.

The 13-and-a-half-acre property has an orchard, a lawn, paths, and allées—a standard list of features—but Kiley's asymmetrical arrangement of them demonstrates his interest in, as Kiley put it, “the translation of various classic elements into a modern spatial sensibility.” 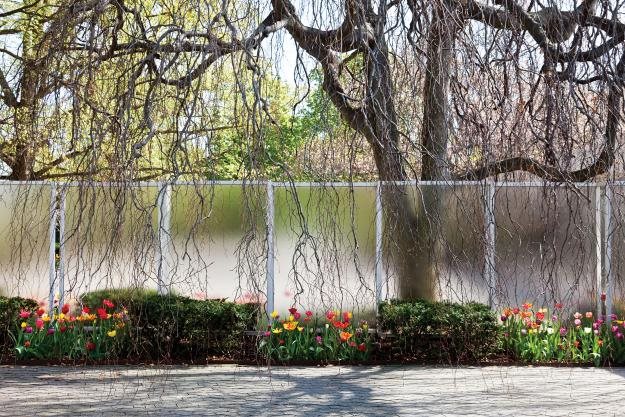 A weeping beech bows gracefully over the glass-and-steel partition Saarinen used to screen the laundry yard from view. Kiley planted on both sides of it to create haunting silhouettes that would be visible through the translucent structure. Photo by: Hadley Fruits/Courtesy of the Indianapolis Museum of Art.

Saarinen's design places four rectangular wings around an open core that contains a sunken living room, an arrangement Kiley made his starting point. “What makes it so modern is that Dan took lines that emanated from the house; he didn't take clues from the landscape,” says Chicago landscape architect Peter Schaudt. “His work grows from the architecture.” The garden itself has a strong architectural structure. “He broke with convention by using hedges more like you would use partitions in an open plan,” says Gary Hilderbrand, who teaches at the Harvard Graduate School of Design and has written on Kiley's work.

A Boston native who studied at (but didn't graduate from) Harvard, Kiley found inspiration for the Miller garden on his airplane flights to and from Columbus. The Yankee was fascinated by the perfect squares of Midwestern farmland he saw below, and those geometries found their way into the Miller garden, particularly the original checkerboard plantings of wildflowers.

The most often photographed element of the Miller garden is its grand allée of honey locusts, a signature element of Le Nôtre's Versailles. But instead of ending the avenue at the front door, Kiley placed the allée parallel to the house's west façade, so the Millers looked through the line of trees instead of down it. “I don't know where else I've seen that,” says Hilderbrand. “He took the conventions of landscape and twisted them just so.” (As with any great design, the twist had a practical purpose: The trees protect the house from sun and wind.) 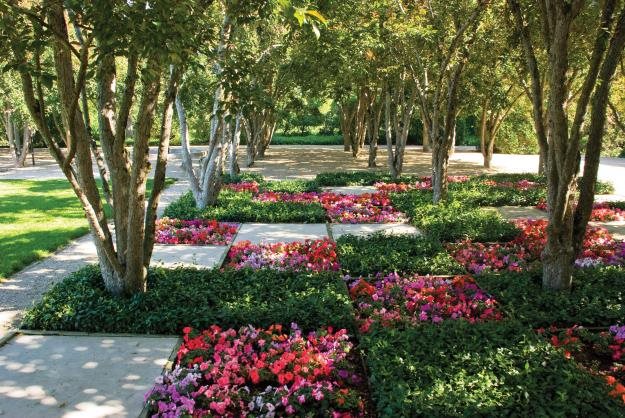 The geometry of Kiley's design drew from the patchwork of farmland the New Englander saw from the air as he flew to the Miller House site. Here, a checkerboard of plantings mixes with a plaza studded with horse chestnut trees. Photo by: Hadley Fruits/Courtesy of the Indianapolis Museum of Art.

Saarinen's unobtrusive lines, glass walls, and skylights under the eaves soften the transition from house to outdoors, and Kiley, who wrote that transparency was a guiding principle for the Miller project, followed suit. “He pressed the landscape right up against the house, so you feel there's no boundary between you and the outside,” says Hilderbrand. An English ivy “moat” brings nature nearly to the façade.

Kiley never sacrificed pure pleasure to abstract theories. “When you're in the house, there's hardly a spot where you don't have a spectacular view into the landscape,” says Mark Zelonis, director of historic preservation for the Indianapolis Museum of Art. The master bedroom looks into a crabapple grove on the north side. An apple orchard that provided fruit for Mrs. Miller's pies has a glade in the middle where the Millers could sit and appreciate their trees.

Some of Kiley's original plan has been changed over the years, and the museum has no immediate plans to restore it. But many elements of Kiley's vision remain, including the weeping beeches that overhang the house and the magnolias whose pink blossoms contrast perfectly with the gray slate panels of the house's façade in springtime. “Horticulturally, the species are very well chosen,” says Kiley expert Marc Treib, emeritus professor of architecture at the University of California, Berkeley. (One exception: The horse chestnut trees along the driveway don't like the scorching summers.) The Millers also deserve credit for maintaining Kiley's work—nature tends to fight his strict geometry. “Modern gardens tend to deteriorate very quickly,” says Treib.

Kiley completed thousands of projects, including landscapes at I. M. Pei's East Wing for the National Gallery of Art and New York's Lincoln Center. Miller House, his first completed major garden, has best stood the test of time. Says Zelonis, “He hit a home run his first time out.”

Ted Loos covers art, design, and architecture for The New York Times, Vogue, and others. He is also a wine columnist for Epicurious.com.

For more information on The Miller House and Garden Tours: https://columbus.in.us/miller-house-and-garden-tour/