A Shamrock’s Meaning: How This Tiny Plant Became an Icon

Though small, the shamrock is a significant little sprig with an intriguing backstory. This article was adapted from its original version by Anna Laurent

Shamrocks are iconic. They are a symbol of Ireland, prominent at St. Patrick’s Day parties, and associated with good luck. But did you know that the story behind this little plant is one with dueling legends and naming disputes? 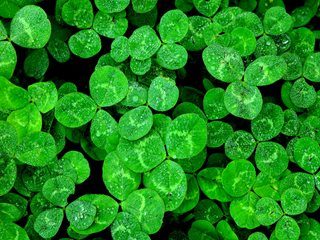 Trifolium repens is one of the species that botanists and historians believe to be the shamrock of lore. Photo by: Malachi Jacobs / Shutterstock

SHAMROCK MEANING: STORY OF THE SHAMROCK

There are two legends about the history of the shamrock in Ireland.

The stories may vary, but one thing is clear: when people all over the world hear the word shamrock, they think of Ireland. (Even though the national symbol of Ireland is a harp!)

SHAMROCK VS. CLOVER: WHAT'S IN A NAME?

Like its backstory, the botanical name of the shamrock is unclear. Many say it’s a clover (Trifolium repens or Trifolium dubium). Others say it’s a wood sorrel (Oxalis acetosella) or a medick (Medicago lupina).

The early Irish countryside flourished with three-leaved clovers, three-leaved wood sorrels, and medicks. That’s why people considered them all shamrocks-until botanists set out to define the difference.

It’s hard to say which was in the St. Patrick story or which was featured in early Celtic artwork. Before the 17th century, plants were classified by their leaves rather than their flowers. For most of the shamrock’s history, its name might not have mattered to those who wore it.

HOW MANY LEAVES DOES A SHAMROCK HAVE? 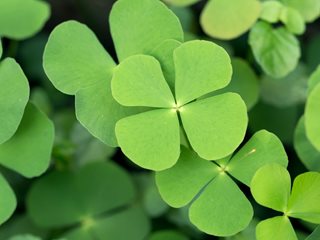 A four-leaf clover, though considered lucky, is not a shamrock. Photo by: Skyprayer2005 / Shutterstock

Perhaps it doesn’t matter whether the shamrock of lore was a clover or a wood sorrel. However, we do know that shamrocks have three leaves. In other words, shamrocks and four-leaf clovers (pictured) are not the same.

For four-leaf clovers, their luck has a history. Druids believed that the four leaves represented the four elements of alchemy: earth, fire, water, and air. They used them as charms against bad spirits.

Four-leaf-clover-collector record holder Edward Martin would also agree on its luck; he’s found 160,000. And anyone who’s knelt in a clover field to beat the 1-in-10,000 odds might also say it’s lucky. But historians, botanists, and Irish purists all agree on this: When you find one, don’t call it a shamrock.