Long overlooked, gravel is finally being recognized for its enduring beauty. By Lise Funderburg 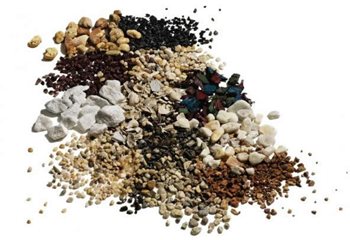 Also related: Lay Your Own Path. Photo by: Michael Kraus.

Too many gardeners  focus only on gravel's function, not on its form. They're preoccupied, understandably, with bloom times, fish fertilizers, and how to keep bulb catalogues and credit cards in separate parts of the house. If they use gravel at all, it's dutifully, as a pathway along carefully planted beds, where it serves as a backdrop for the limelight-seeking blooms spilling over its edges. Or on a patio as a visual pause between, say, the attention-demanding corkscrews of Harry Lauder's Walking Stick (Corylus avellana ‘Contorta’) and platter-size, come-hither dahlias. Gravel, for too long, has been cast in supporting roles as an actor whose job is simply not to steal the show.

Lately, though, gravel has been gaining fans who appreciate its variety and versatility and treat it like a star. “I'm crazy for gravel,” says Los Angeles landscape designer Marissa Mandel. “I love to see things floating in it, whether that's raised beds or larger stones.” Mandel favors a locally quarried gravel called Del Rio, which she uses in design schemes that range from arid to lush Moroccan. “I love the sound of it underfoot and the sound of water on it when it rains,” she gushes. “I'll use it as grout on a patio, or as landing-like steps edged with steel.”

Gravel's growing popularity is related to its increased availability and also to an expanding awareness of its inherent richness in color, shape, and size. The only real limits in choosing gravel are your wallet (the farther gravel is trucked, the more it costs), your willingness to give up plantable turf (terra firma versus terra even more firma), and your level of interest in living sustainably (think globally, pave locally). “If a client said to us, ‘We want lava rock,’” says Philadelphia landscape architect Tavis Dockwiller, “we say, ‘Move to Hawaii.’”

Clients of Dockwiller's Viridian Landscape Studio are asking for local materials, and not just in order to reduce the carbon footprint. “For a long time, you could go to any part of the country and the landscapes would look the same,” says Dockwiller. “Now people are saying, ‘It doesn't look like home anymore.’” Dockwiller herself won't use river-tumbled stones, even local ones, on a dry slope because nature would not have put them there.

Paving locally doesn't have to impose a design constraint. “We are blessed with a geology that runs from sedimentary to igneous,” says Minneapolis landscape architect Thomas Oslund. “We use anything from dolomitic limestone from the southern part of the state to crushed granites from the central part. We tailor our choice to the color and effect we want.” Oslund's go-to gravels are a trap rock, from Dresser, Wisconsin, and a crushed red limestone from Shakopee, Minnesota, so good at draining water that it lines baseball diamonds throughout the Midwest and Canada.

Rock seems inert, but over millennia it does change. Much of it was born as molten magma deep within the Earth, and all of it derives its pigment and form through contact with elemental forces: fire, wind, sun, and water. By the time it becomes gravel, it's been pounded into pebbles along rivers and oceans, or excavated from quarries and crushed.

Crushed gravel can be rough on bare feet, but the pieces interlock as they settle, providing a more stable surface and less scattering over time. Rounded gravel-despite silhouettes that project deep tranquillity-is more like “walking on ball bearings,” Oslund says. Both types allow water to percolate down into an aquifer, and in light colors can serve as a heat-reflecting mulch. Warmer-toned than pavement, cooler and more neutral than grass, gravel is weatherproof and malleable: it can follow curves as easily as it does straight lines. Properly installed, it acts as a weed barrier, and the colors pick up on the adjacent plant palette.

Gravel is easy to set down, requires little maintenance, and, if well-contained, calls for only minimal replenishment every few years. It's cost-effective, given that it requires no mowing, watering, or fertilizing. Gravels researched for this story ranged in price from $20 to $152 per cubic yard; a 20-by-20-foot patio can be covered with roughly three cubic yards.

Throw in that it's biodegradable (give or take an ice age), and gravel seems to be the surface without a downside. Alas, it has a few. If silt builds up, the gravel clogs. It won't break down, like mulch, into soil-amending nutrients. Gravel can also break your heart. “We originally had Shirakawa in our Sand and Stone Garden,” says curator Sadafumi Uchiyama of Portland, Oregon's Japanese Garden. With a texture that alternates between jagged and smooth, Shirakawa, a black-speckled granite from Kyoto, Japan, is prized for its ability to hold raked grooves; those contemplation-prompting patterns lasted weeks unless weather or rambunctious children intervened. Now the source is a protected waterway and it's illegal to harvest Shirakawa.

2. Dresser trap rock
A dark, fine-grained igneous rock known for being especially hard and therefore long-lasting. Available throughout the Midwest.

3. Bantam egg
A mix of whites, beiges, and yellows from southern New Jersey.

4. Rubber mulch
A recently developed gravel alternative made from old tires. Can be custom-dyed and used for surfacing
playgrounds and mulching tree pits.

5. White river rock
More popular than the brown river rock that comes from the same state, this version is also more expensive.

9. River jack
A river rock from near Easton, Pennsylvania, whose variegated colors tend toward gray and brown, making it an excellent grout for the sand-swept joints on a bluestone path or patio.