Here in Alys Beach, on the coast of Florida’s panhandle, the sun is so intense that even on a mid-September day my husband, David, and I wait until early evening before crossing over the pristine dunes with our infant daughter, Ailigh. The dusk light is a watercolor play of pinks and indigos washing over a reflective canvas of fine quartz particles, ground away from the Appalachian Mountains during the Ice Age and carried by the Apalachicola River into the Gulf. 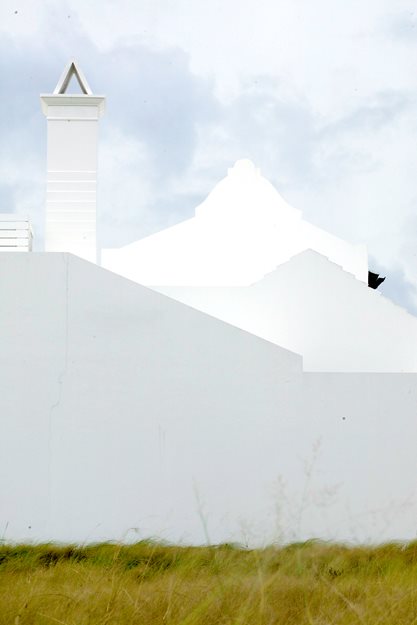 I remember my first glimpse of the town as I drove along Highway 30A, just west of Panama City Beach. A cluster of whitewashed walls and peaked roofs eased into view. Photo by: Jon Whittle.

David dips Ailigh’s feet into the frothy white waves, eliciting excited babble; her soft dimpled legs instinctively reach for the ground until her bare feet feel sand for the first time. Florida is our home, and this “first” could have happened at any number of beaches. Yet it is no accident that we chose this one. I’ve pictured bringing my family here since before we were three.

My husband and I live 400 miles south of Alys Beach, in Orlando. As longtime New Yorkers who had moved to Florida for a job rather than for its virtues, we’ve spent an inordinate amount of time researching, discussing and imagining our idealized future home. We’ve envisioned a place with urban elements where we can be part of a community of creative, energetic, open-minded people while living more in tune with nature; a place where our child can play freely outdoors, and her education can effortlessly expand beyond the classroom. After my first visit to Alys Beach and its neighboring communities — known collectively as the Beaches of South Walton — for a magazine assignment in 2008, I wondered if I’d found that place.

I remember my first glimpse of the town as I drove along Highway 30A, just west of Panama City Beach. A cluster of whitewashed walls and peaked roofs eased into view. Against a cloudless sky, Alys Beach was a sparkling oasis that reminded me at once of Morocco, Bermuda, the Mediterranean coast and Latin America — remnants of my traveling days, before family gave home life more appeal than the road. 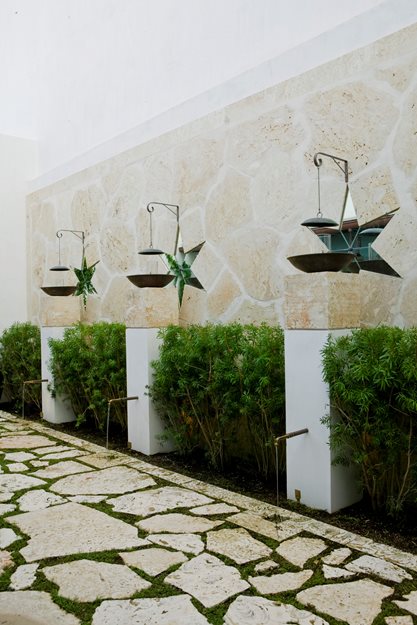 Walking along the beautiful, and also water-permeable, cobbled pathways, I peek through the occasional decorative cutout or gap in the wooden and iron doors that lead into private courtyards. Photo by: Jon Whittle.

But what really drew me was how Alys Beach’s master plan, designed by Andrés Duany of the Miami-based architectural firm DPZ (Duany Plater-Zyberk & Co.), emphasized both community and a sustainable relationship with this fragile slice of Florida’s eco-systems. Duany is a co-founder of the Congress for the New Urbanism, which promotes high-density, mixed-use, walkable and ecologically sustainable towns. Alys Beach is one of four New Urbanist communities along 30A, where the movement got its start in 1981 just up the road at Seaside. There, an alluring collection of shops, restaurants and pastel-colored cottages with vast front porches are all connected by lanes and pathways designed for pedestrians, not cars. Seaside set the blueprint for a beach town built away from the beach, protecting the dunes. Alys Beach, like all of the towns along 30A, followed that lead. One of the things that really attracted me to the area is the custodial role its residents play in protecting nature.

The more I learned about Alys Beach, the more I liked it. Not least appealing was the fact that the community consists solely of green-
certified structures that are fortified to withstand hurricanes. The town, bookended by its precious beach and dunes to the south and 22 acres of preserved wetlands to the north, is committed to sustainability and is meant to be standing, alongside its untouched natural habitats, hundreds of years from now — a testament to the vision of the town founder, Jason Comer, whose family bought these 158 acres in 1977 and collaborated with DPZ in the design of the present-day community.

My life has been full since that first visit, including a round-trip move to California and back, and the much-anticipated birth of our daughter. Now, once again, I’ve come to Alys Beach as a guest, but this time it feels different. I’m with my family, and we’re pretending the lavish house to which we hold the key is ours, enjoying the sound the heavy wooden door makes as it thunks closed against the iron latch. The home’s open-air entryway leads to a courtyard, where covered settees piled with pillows, containers planted with palms and the soothing sound of water from a wall fountain make a convincing argument for lingering outside. French doors on three sides of the courtyard open into the living room, kitchen and master suite. The fourth side is a wall that is shared with the house next door. Density is key to New Urbanism.

Before settling in, I suggest we explore the town; I remember enough about it to play tour guide for David. On our walk we encounter a tropical soundscape of frogs, trickling fountains and an allée of softly rustling weaver’s bamboo off the main pedestrian path. I’m struck by the unfolding landscape of tough native species and other plants adapted to salt, wind and drought — a green-on-green palette that for me is the true essence of Florida. 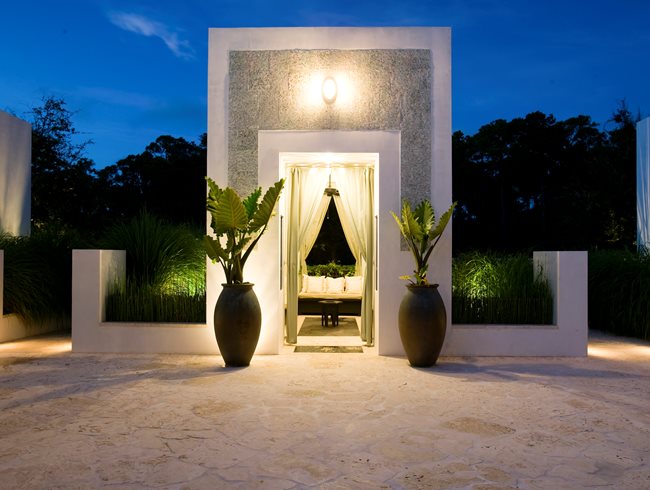 A private, poolside cabana at nightfall in the central complex, Caliza. Photo by: Jon Whittle.

Walking along the beautiful, and also water-permeable, cobbled pathways, I peek through the occasional decorative cutout or gap in the wooden and iron doors that lead into private courtyards. A pair of white Scotties float on royal-blue pool rafts in one; a woman sits cross-legged, reading, in a chair beside a fountain in another. This choice of seclusion is a defining characteristic that sets Alys Beach apart from other New Urbanist towns. Here, there are no front porches on which to drink lemonade and gab with the neighbors. Instead, families enjoy private outdoor space in the form of courtyards modeled after the patio homes in the city of Antigua, Guatemala.

I am reminded of the house built by my great-grandfather in San Juan de los Lagos in Jalisco, Mexico. During my first and only visit there, in 1999, I spent an emotional day retracing my roots, stitching together details of my past as told to me by a stream of relatives whom I’d never met before. Perhaps it is the weight of this memory that makes me feel like I’ve already found a home here in Alys Beach.

Near the end of the pedestrian path, we come to the Fire Pit Green and sit in a couple of white Adirondack chairs. This is just one of many pocket parks in Alys Beach, enticing civic spaces where neighbors can interact with one other. As we explore, the parks reveal themselves — sometimes openly, sometimes coyly — as a string of garden moments that invite us to pause on a bench or chair or, one of my favorite spots, on face-to-face seats built into a retaining wall beneath the lacy shade of a willow tree. These thoughtful green spaces provide quiet complements to Alys Beach’s central built feature: an architecturally magnificent complex called Caliza that comprises pools, lounge areas, a bar and a restaurant, all surrounded by plantings that provide structure, color, shade and a connection to the surrounding environment.

Returning to the Fire Pit Green, I’m hoping I’ll catch sight of Ann Hartley, a kindred spirit I’d met on my earlier visit who lives just off the town green. Ann and her husband, George, were two of Alys Beach’s first fulltime residents and have become well known in the Beaches of South Walton as the owners of three restaurants (including George’s, the only eatery in Alys Beach). It was Ann, partly, who got me dreaming about living in Alys Beach. When I met her, I was impressed by her and George’s fearlessness. “Girl, we’re just crazy people,” Ann said to me, before going on to tell me the story of how they’d picked up and left Dallas with their three kids in tow and plunked the family down in nearby Seagrove, looking for a place where it didn’t matter what kind of car you drove or where you spent your vacation. “If you ever need a push,” Ann said, “call me.” It’s an offer I still keep in my back pocket.

Summer’s daily storm strides in, so we give up on seeing Ann for now and race back to our house as rain begins to fall. We climb the stairs and watch the show from the balcony. Sheets of water and flashes of lightning fill the space between the heavy gray sky and the golden oak scrub covering the untouched swath of land to the west. The thunder shakes the walls, but we feel protected in our cocoonlike house. Watching the storm, we engage in our favorite pastime pondering the road ahead.

The weather moves out, leaving behind the scent of pine needles and sand, and a coolness in the air. David and I gather up our baby and walk to the beach. Perhaps, one day, she’ll call this place home and be able to say, “This was the first beach I ever stood on.”