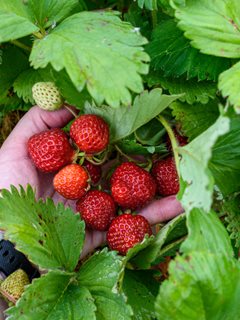 It’s important to know the different types in order to choose the best strawberries for your garden.

The most commonly grown varieties are June-bearing, which produce a heavy crop of large berries over a period of 2 to 3 weeks, most often in June—hence the name. Also referred to as short-day strawberries, they are designated as early, mid- and late-season to distinguish varieties that produce at slightly different times. Planting one or more varieties from each time frame can extend your harvest. Plants bear fruit beginning in the second year, producing well for 2 to 4 years with optimal growing conditions. Most are not suitable for regions hotter than USDA zone 8.

These are not truly everbearing, but produce two main crops, in later spring and then again in late summer to early fall. Most are garden strawberry hybrids (Fragaria x ananassa) but some are of the species Fragaria vesca. Fruits are smaller and plants generate fewer runners than June-bearers. Some varieties are suited to hotter climates.

Fruit and flower production is continuous, with smaller but consistent yields from late spring to frost. Plants bear fruit in their first season, which tends to be smaller than June-bearing and everbearing types. They are less forgiving of conditions such as dry soil, crowding, or weedy conditions, and are often sold as “everbearing."

Though the berries of alpine strawberry (Fragaria vesca, syn. F. alpina) are small, they are intensely flavorful, making them a gourmet favorite of avid kitchen gardeners. Also known as wild strawberry, woodland strawberry, or European strawberry, all varieties are everbearing or day-neutral, with self-sowing possible.

Some varieties are grown mainly for their foliage and flowers rather than their insignificant fruit. These tough, quick-growing types thrive even in poor soils, are somewhat shade-tolerant, and make an attractive groundcover. Use as edging along a pathway, on a slope, as a lawn substitute, or in containers. Varieties include coastal strawberry (Fragaria chiloensis), which has white blossoms and is drought-tolerant, and ‘Lipstick’ (Fragaria x ananassa), with pink flowers and fall rebloom.

Learn more about how to plant and grow strawberries.