In 2006, honeybee colonies began to succumb to colony collapse disorder at a record rate. Without pollination by bees, tomatoes, cucumbers, and countless other crops won't fruit. Richard Schweid looks at the return of native bee species and how they might save our crops. By Richard Schweid

Jose Cabada is obsessed with bees. Listening to the 52-year-old businessman talk about them—especially the indigenous, stingless varieties belonging to the melipona genus—it's hard not to become infected with his enthusiasm. “Pre-Columbians used these bees for many things,” he says from his land preserve in San Carlos, Costa Rica, “They are common throughout the dry forest in the northern Pacific region of Costa Rica. Legend says their honey can be used to prevent cataracts and to speed recovery after childbirth.” 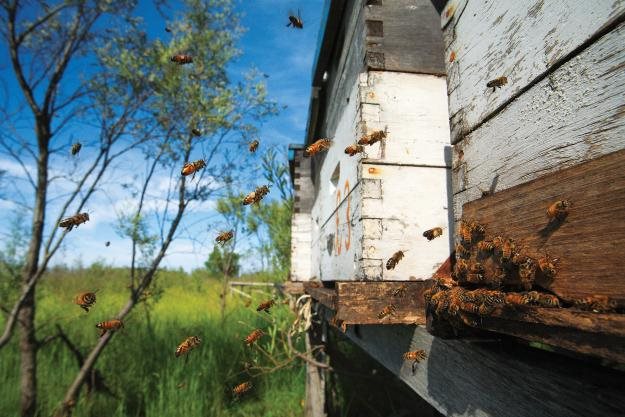 Honeybees, brought to the Americas from Europe in 1622, have decreased in population because of colony collapse disorder. Photo By: Eric Tourneret.

His is more than a hobbyist's obsession. In 2005 Cabada started an eco-tourism private reserve in Costa Rica that channels government and nonprofit money into reforestation and carbon reduction. Protecting Costa Rica's native bees wasn't originally part of the plan, but in 2006 Cabada met a farmer who kept hives of meliponini bees. In addition to making prized honey, the farmer told him, the bees are remarkable pollinators—a significant fact, considering all the news recently about the decline of the European honeybee—the hive-dwelling, honey-making insect most of us think of when we hear the word bee—due to a condition called colony collapse disorder (CCD). Wheels began turning in the businessman's mind. Maybe, he thought, he could install hives of this native bee to help pollinate plants on the part of his preserve that is being turned back into rain forest. Maybe he could bring tourists to see the hives. Maybe he could sell the honey. And maybe he could teach locals to do the same so that they'd be less likely to clear-cut forest for farming. Cabada's bee project was off and running.

A few thousand miles to the north, in Christiansburg, Virginia, another native-bee project is under way, writ small. That's where Edmund Blackford, a retired Army officer, and his wife, Elaine, recently built a new home, complete with low-energy lights, a pesticide-free garden, and, attached to their deck, a house for orchard mason bees that Edmund purchased online after reading about the bees' beneficial effects on local ecosystems.

Orchard masons (Osmia lignaria) are prolific pollinators, and unlike the European honeybee, this smaller, shiny blue-black bee is native to the Americas (honeybees were brought over from England in 1622). It is less susceptible to CCD because, like most native species, it is a solitary bee, which means it lives not in a sociable hive but alone in a cocoonlike hole, usually in a reed or other cavity.

The Blackfords' bee house consists of little more than a box with holes drilled in it with a tube of parchment paper inserted in each hole. The bees then cap the holes with plugs made of mud and bee saliva, and the larvae develop inside. In the spring, the bees chew through the caps and come out to mate. The females then spend their days in search of pollen and nectar, which they deposit in their nests. The following year, the cycle begins again.

The growing interest in native bee species in the Americas has coincided with a momentous ecological event. In 2006, almost four centuries after their ancestors arrived in North America, honeybee colonies began to succumb to CCD and collapse at a record rate. The worker bees would suddenly disappear, and the hives would die, which scientists have attributed to a combination of factors, including fungus, virus, pesticides, and environmental stress. Honeybee populations in the U.S. have fallen by some 30 percent in the past five years, exposing an alarming weak link in our food chain: approximately a third of U.S. agricultural crops—worth an estimated $14.5 billion—depend on honeybees for pollination. CCD has also highlighted an inalienable fact of life: human beings can do perfectly well without honey, but we can't exist without pollination.

Understanding and promoting the activity of native pollinators, therefore, has become important to large-scale farmers as well as backyard gardeners. Without pollination, tomatoes, cucumbers, and countless other crops won't fruit. Fortunately, the 3,500 or so native North American bee species have been less affected by diseases that kill honeybees, and many (along with some native wasps and ants) are excellent pollinators. While it takes some 20,000 European-type honeybees to pollinate an acre of apple trees, a mere 250 orchard mason bees will do the same job. The female orchard mason bee is equipped with a scopa, a basket made of hair on its abdomen, that allows it to transport much more pollen than a honeybee, which carries the spores on its legs. Native bees also get to work earlier in the day and put in longer hours. What's more, says Denise Shreeve, an architectural designer in McLean, Virginia, who makes and sells specialized native-bee houses, certain native species like the orchard mason bee are especially amenable to backyards and urban gardens. “[Orchard mason bees] cover some six acres in their search for pollen and nectar, while a honeybee can cover 18,000 acres,” she says, “so orchard mason bees are really well-suited to a small urban area.”

An equally prodigious native pollinator—and certainly a better-known one—is the bumblebee (Bombus impatiens). Like the honeybee, the bumblebee is a social insect, with a colony of workers serving a queen, but unlike the honeybee, the bumblebee is a buzz pollinator, meaning it lodges itself inside a flower and vibrates its body to shake pollen loose and fill its scopa with spores. This process is particularly effective for pollinating many native plants. In addition, the bumblebee will work in bad weather. “For us, that's huge,” says Linda Rinta of the Plymouth County Conservation District in southeastern Massachusetts, where she helps local farmers create bee habitats. On her own farm, Rinta uses bumblebees to pollinate her five acres of blueberries. “If you don't have good weather, the honeybees get fussy. The bumblebees will work in whatever weather there is.”

In sunny California, native bees are drawing even more attention, and for good reason: the state is more affected by CCD than any other because the $1.9 billion almond industry there depends on trucked-in honeybees to pollinate the almond trees. Fortunately, California is home to some 1,500 species of native bees, which pollinate everything from rosemary to watermelons. The squash bee (Peponapis pruinosa), for example, has always been highly valued by gourd and melon growers. By the time honeybees are ready to leave the hive for a day's work, the little gray-and-brown-banded squash bee has been out pollinating for hours. It stores pollen in underground tunnels, often dug along fence lines. Entomologists in California are now working on ways to propogate these and other native pollinators.

California is also home to many longtime native-bee enthusiasts. Since its founding in the late '90s, the Urban Bee Project at UC Berkeley, has been promoting native-bee populations in urban gardens, which are increasingly threatened by habitat destruction, pesticides, and disease. University researchers have found that certain plants draw certain bees. California poppies, for instance, will bring bumblebees and sweat bees, while black sage attracts digger bees.

The discovery of these predictable bee-plant relationships has allowed even beginning gardeners to encourage diverse native bee populations. After watching his orchard mason bees thrive, Edmund Blackford says he'd recommend native-beekeeping to any gardener. “It's winter now, and we're looking forward to when the temperature reaches 50 degrees, listening to the crunching sound as they chew their way out, and watching them fly for the first time in their lives.”

Richard Schweid is the author of Consider the Eel.