A garden in Patagonia, Arizona, takes the Southwest climate in stride By Jenny Andrews

Margaret Joplin’s work has a definite elemental appeal. Its celebration of steel and stone speaks of earth and industry and craftsmanship. You can almost hear the sounds of forge and fire, hammer and chisel. And the studied awareness of water apparent in her landscapes is simpatico with the Southwestern surroundings that trigger Joplin’s creative muse. 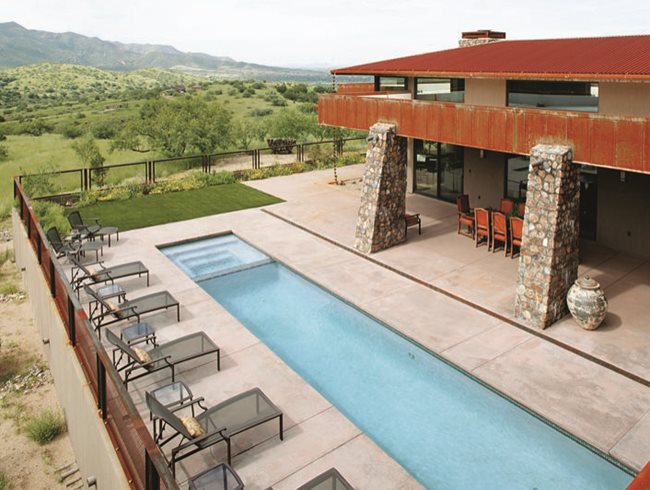 A lap pool with a spa is a favorite hangout (“Bill swims and I float,” says owner Suzi Sheweloff); an adjacent overhang makes it possible to enjoy being outdoors all year. Photo by: Tim Fuller.

Principal of Tucson-based Design Collaborations Ltd., Joplin moved to Arizona from Oklahoma City for college and has been there ever since, opening her landscape-architecture firm in 1990. Since then she has tackled a range of projects, from public to residential.

One of Joplin’s larger projects has been a residence in Patagonia, Arizona, a hot spot for birders and hikers, situated in the prairielike mid-desert. Here grasses and wildflowers sway, and mesquite, one-seed juniper and scrub oak dot a landscape of rolling hills. It’s cold in the winter, hot in the summer and the wind will knock you down, but the wild beauty is mesmerizing. 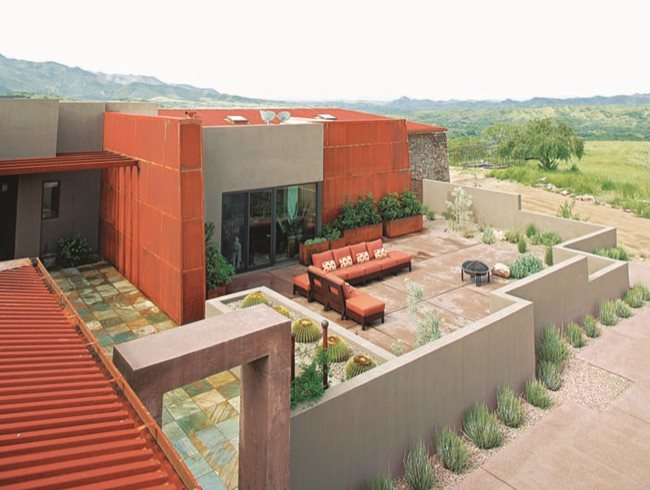 Materials used inside this modern Arizona home — steel, travertine and poured colored concrete — are continued outside. Set on a butte, the house stair-steps down a slope, with the wild mid-desert landscape in the distance. Close to the house, plants suitable to the climate are arranged in a more orderly fashion, like the Euphorbia antisyphilitica lined up along the perimeter wall. Photo by: Tim Fuller.

Or so it is for Suzi and Bill Sheweloff, who were poised to close on a house in Westlake Village, California, when they spied an ad for a “secluded hacienda” in Arizona. Intrigued, they hit the pause button on the closing and flew out for a look. The region took immediate possession of them and now, though Bill (a surfer) travels regularly, Suzi says for her “it’s very difficult to leave.”

The two 40-acre parcels that they eventually purchased (having passed on the hacienda) proved to be surprisingly rich, though challenging. The house that followed in 2006 has been a uniquely personal project for the Sheweloffs: Every few years since they were married they have sold everything, lock, stock and barrel, and moved to a new home (Suzi calls it a kind of hobby, moving and redesigning), but this is the first house they have built from the ground up.

Joplin was brought in at a very early stage, just as the footer for the house was being formed, which was a key factor in keeping the continuity between indoors and out. 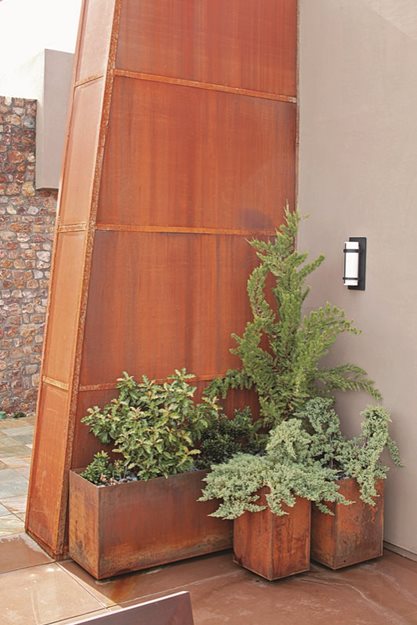 Carbon steel containers designed by Joplin and fabricated by architect Bob Clements through his side business dubbed Bugscrap will last forever under their skin of rust. Photo by: Tim Fuller.

As construction progressed, Joplin and Suzi worked together closely to hash out every detail. “Suzi has fabulous style and an innate design ability,” says Joplin. “She really had the vision.” Some of the hardscaping Joplin employed even repeats materials used indoors, including steel, poured colored concrete and travertine flooring, which was brought right out the front door and onto the patio. Serendipitously such materials are completely in keeping with a characteristic theme of Joplin’s work: creative use of common materials. Acid-washed concrete, steel, rebar, angle iron and (not surprisingly for Arizona) aloes, yuccas and agaves are high on Joplin’s list of favorite components, and she made good use of them at the Sheweloffs’. Says Suzi, “Margaret is a weaver, working everything together.”

The house, which is roughly in the shape of a plus sign, allows for four outdoor living spaces in the corners: a wide travertine patio near the entrance with a sitting area; a pool and encircling acid-washed-concrete deck; a dog run (with artificial turf — a first for Joplin); and an open, unpaved patio with a stone path leading to an organic vegetable garden. Extending around nearly half of the house is a deep overhang, which gives cooling shade in summer and creates cozy, protected niches in the winter. Though temperatures range from 100 degrees to below freezing, under the overhang it’s nice all year.

For the plantings, Joplin started at the farthest reaches of the property, installing trees and positioning boulders to screen off the neighbors and the road, and worked her way toward the house as the Sheweloffs became more certain of what they wanted. Along the decomposed-granite drive, she used planted and hydroseeded indigenous species (“Today it looks like native grassland,” says Joplin). 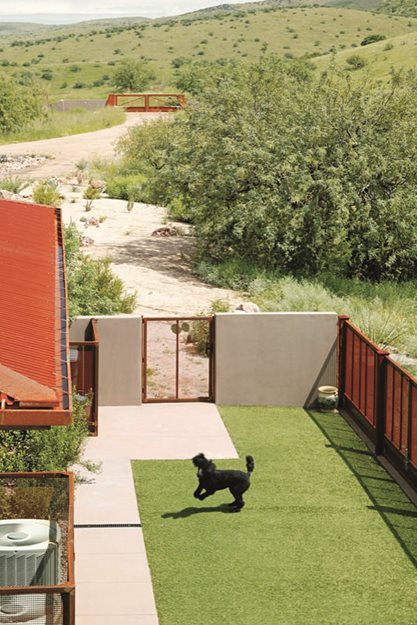 Standard poodle Lola, one of the Sheweloffs’ five canines, frolics in the dog run, complete with artificial turf, an easy-care alternative that adds a bit of green in a region too dry for lush lawns; in the distance, the entrance gate, also designed by Joplin. Photo by: Tim Fuller.

Closer to the house, Joplin utilized a wide variety of plants to achieve a sagebrush, plains, Southwestern look, arranging the beds and sculpting the land to take full advantage of rainfall and to channel runoff from the house’s hardscaping (she also employed rain chains and a drainage system installed under the patios). One of her charges was not to plant anything so big that it would block the panoramic view from the house, which sits on a butte. Sans windscreens in this gusty location, Joplin opted for tough-but-pretty, lower-growing species. Penstemons, chocolate flower, little bluestem, globe mallow, blue flax, prickly pear cactuses, agaves and yuccas are just a portion of an extensive plant list that is dominated by natives.

Three years later, with the landscape settled in (so too the Sheweloffs), Joplin’s merging of homestead and wild terrain is complete, and the homeowners insist there’s not enough time in the day to fully enjoy it. As Suzi says: “The sky and the sunsets are unbelievable. And the stars are amazing — you feel like you can touch them.” The wildlife has accepted it as well, a clear sign that something is working. Deer, coyotes, kudamundi and javelinas wander through, and a pair of phoebes recently nested in the entry light fixture. Despite Bill’s loathing of snakes (“He levitates” when he sees one, says Suzi), the fauna has been one of the most rewarding parts of living here. One of the Sheweloffs’ favorite ways to spend a lazy afternoon is hanging out by the pool in their chaise longues, reading and listening to the songbirds. No wonder it’s difficult to leave. 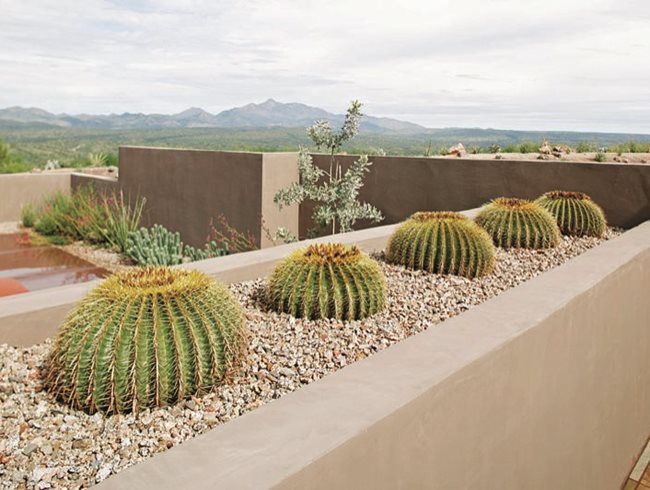 Golden Barrel cactus is the ultimate drought-tolerant plant and here also acts as a sculptural element in a raised bed separating the entry from the patio. Photo by: Tim Fuller.

Precipitation
No matter what region you live in — from the hot, dry Southwest to snowy Alaska — it pays to become familiar with your local rain and snowfall, both the annual amount and seasonal patterns. And with global-warming issues, you might need to update old information. This will give you more-realistic expectations as far as the plants you can use, and the wisest size and type of garden.

Allocation
Plan your garden so it needs as little supplemental water as possible. If a few plants need more monitoring and more water, keep them near each other, near the house and near a spigot, and design the garden to channel rainwater to needy plants. If you put in irrigation, customize the system taking microhabitats into account. Mulching and temporary irrigation can also be installed to get new plantings through their first few years.

Application
Though drought-tolerant gardening is a universally smart approach, irrigation isn’t a landscaping evil, but use it wisely. Monitor heads to be sure they’re in working order and spraying where they should (i.e., not on the sidewalk or street). Install a rain gauge (how many times have I driven to work in a downpour and seen a neighbor’s irrigation going full bore). And if there’s a way to connect it to a rainwater catchment or gray-water reuse system, that’s taking it to the next green level.