Some communities push back the wilderness and impose a homogenized identity on the landscape, but not so in Paradise Valley, a small town in the Phoenix area. While in other parts of the region the desert is losing ground to development at an alarming rate (one source estimates 1 acre per hour), Paradise Valley residents are proud of their Sonoran surroundings—home of the famed saguaro cactus—and fight to maintain its integrity. As one of the wealthier communities in the area, the lots are large, which enables the town to give nature plenty of elbowroom. And the views of nearby Camelback Mountain are stunning. As landscape architect Christy Ten Eyck says, “It’s one of the few places where you really feel like the Sonoran Desert is alive and well.” 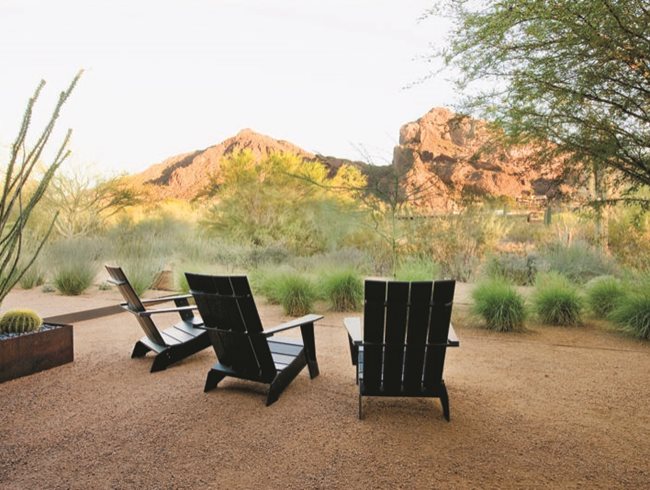 Facing Camelback Mountain, this Paradise Valley, Arizona, garden by Christy Ten Eyck uses desert-friendly plants to frame the view, including an ocotillo and barrel cactus on the left and a soft border of deer grass. Photo by: Steve Gunther.

Based in both Phoenix and Austin, Ten Eyck was called in to create a garden at the Paradise Valley home of an architect couple who had just built a studio addition on their 1960s home; she was given free rein, though a limited budget—always an interesting challenge. So she kept the design simple, sustainable, and savvy, and paid attention to the land while looking for ways to be creative and appropriate with materials, including a little recycling where the opportunity arose.

Construction of the new addition had left the landscape around the house a mess, looking like the aftermath of a hard-fought battle, strewn with building material debris, churned-up and compacted soil, and broken plants. The first order of business was to erase the scars, starting with an arroyo-a small watercourse that’s usually dry except after heavy rains-that had been damaged by grading. As Ten Eyck says: “The arroyos are beautiful and lush, and are the ephemeral conveyors of water. They are the lifelines of the desert.” And Paradise Valley is committed to taking good care of them. Once indigenous plants such as palo verde, desert lavender, chuparosa, and mesquite were in place, a topdressing of native decomposed granite made the repaired area blend into the desert. Using the same granite bounded by steel edging, discreet steps were added as access for hiking into the arroyo. 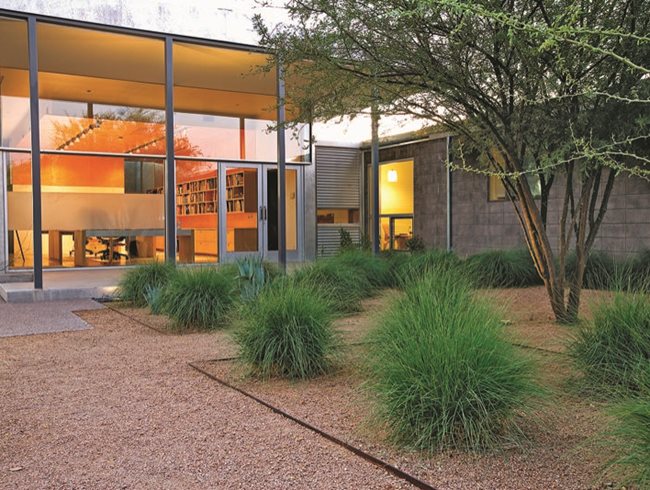 Next, Ten Eyck considered how best to carve up the space around the house to create usable outdoor living areas that allowed the homeowners to enjoy the view. For this she used materials that impose order while blending nicely with the natural landscape, interlocking places for activities with planted areas. Her thinking was to “create spaces outside by building defined, ordered gardens that then melt into native revegetated areas.” For plantings, a simple, low steel edging was used as boundaries for beds of desert-friendly species such as ocotillo, barrel cactus, prickly pear, deer grass, palo blanco trees, and coral plant. A large steel planter holds a palo brea tree underplanted with Mexican honeysuckle. No need for Cor-Ten steel in the desert; regular steel works just fine in the low humidity, and the geometric lines of the edging and planters, and the warm orange-brown coloration from the thin layer of preserving rust lend a refined rusticism to Ten Eyck’s layout.

When it came to the hard-surface areas, Ten Eyck continued to be mindful of getting the most bang for the buck, while still being stylish and eco-conscious. For the surface of beds and walkways, Ten Eyck played with color and texture using gray Mexican beach pebbles and the reddish decomposed granite. For the patio on the north side of the house-a long, narrow space bordered by a fence set up as a dining area-she chose exposed-aggregate concrete. When a section of the existing concrete entry landing was broken up and removed to make way for a planting bed, the pieces were repurposed as a stepping-stone walkway along the west side of the house. Overall, concrete use was minimized in the garden, not just for budget reasons but also because it’s a much hotter surface in the desert than materials like decomposed granite, which also absorbs rain better than concrete. Some concrete was needed, though, because it’s a better fit for areas inclined to activities like outdoor parties. 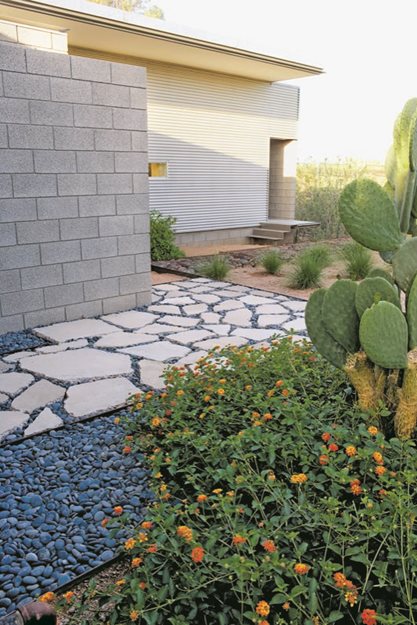 When a concrete landing was partially deconstructed to make way for a planting bed, the pieces were smartly repurposed into a stepping-stone path. Photo by: Steve Gunther.

In some cases, plants serve as stand-ins for constructed elements. Muhlenbergia rigens (deer grass) forms a boundary between office life and home life by defining a decomposed-granite walkway leading to the architecture studio, keeping clients from walking through private areas of the garden. Where a view-blocking wall once stood between the house and Camelback Mountain (Ten Eyck likens this previous arrangement to a “compound”), a row of deer grass now gives definition without restriction. Says Ten Eyck, “By taking the wall down and connecting the house with the natural desert, it allows nature to be part of the homeowners’ everyday life.” A grouping of Adirondack chairs positioned behind the softly rustling, grassy border allows a front-row view of the mountain, and is the perfect spot to greet the day with a cup of coffee or to watch the glow of a desert sunset.

On both micro and macro levels, Ten Eyck’s approach is earth-friendly. Within its borders, the garden is drought-tolerant, permeable, species-appropriate and low-impact. And she made the most of simple materials (as a garden-warming present, Ten Eyck gave the homeowners planters made from leftover steel pipe). The site also welcomes in the larger landscape, embracing the Sonoran Desert and blurring the edges between constructed garden and nearby nature, recognizing that the desert itself is a paradise. 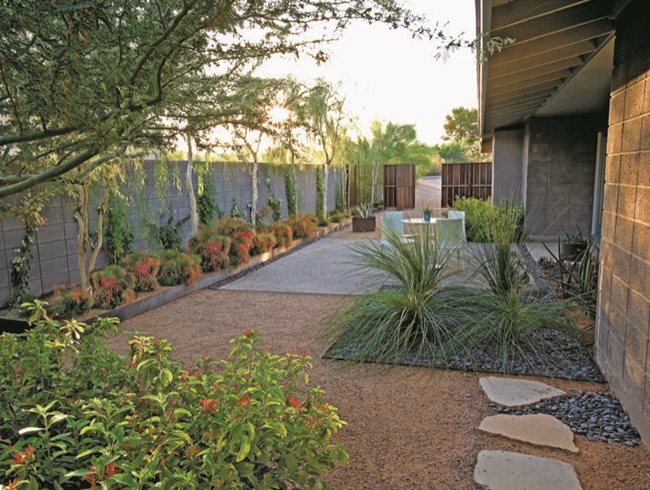 A dining patio makes minimal use of heat-absorbing, exposed-aggregate concrete. The remainder of the long, narrow space is surfaced in decomposed granite and Mexican beach pebbles, with planting beds defined by steel edging. Along the wall are heat-and drought-tolerant palo blanco trees and coral plant. Two steel planters made from leftover pipe were a garden-warming present from Ten Eyck. Photo by: Steve Gunther.

Assess: Before getting too deep into a garden-building project, take stock of what you have. Budget is a big factor for most people, but even if the sky’s the limit, it’s still smart to be thrifty and conservation minded. Assign funds to the things that matter most. If a patio or fence is still in good shape and serves its purpose, maybe it’s better to keep it and find ways to enhance it. If a large tree is still healthy, consider incorporating it into the design rather than chopping it down.

Anticipate: Before construction and landscape crews show up with backhoes, chainsaws, and jackhammers, make sure everyone clearly knows what stays and what goes. They’re on a mission to get in and get out efficiently, and they’re more accustomed to demolition and rebuilding than weighing the usefulness of each element as they go. If you’re going to be finding new purposes for materials, take advantage of the strong labor and heavy equipment while they’re on site so you’re left with pieces in sizes you can manage later.

Reassign: Recycling isn’t just about cans and bottles in a bin under the sink. Being creative about repurposing materials can offer dramatic design possibilities, and it keeps them out of the landfill. We’ve all heard if it’s not broke, don’t fix it, but if it is broken, maybe there’s an interesting way to use it, like Ten Eyck’s walkway of concrete pieces.