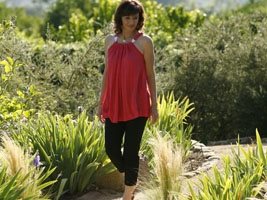 It takes a special kind of plant palette to holds its own next to the dramatic natural setting of Ojai. Just ask Jessica Thompson and Kimberly Ainsworth of Ojai-based Green Goddess Gardens. The women designed and installed an array of distinct and complementary areas at Mary Steenburgen and Ted Danson's property, following landscape architect Pamela Burton's initial concept and hardscape design.

Like Burton, their style combines native California flora with attractive and durable, drought-tolerant plants from various Mediterranean regions. They use organic and sustainable methods to create a naturalistic landscape setting suitable for its site. "We love using plants that bring life to the garden with color, texture and aroma," Thompson says.

Because they live and work in Ojai, the women have a lot of experience with perennials, grasses, succulents and shrubs that are both frost-resistant and tolerant of Ojai's 100-degree-plus summer temperatures. While observing  the many microclimates on Mary and Ted's property, Green Goddess Gardens adjusted some of the planting schemes, using varieties uniquely suited for Ojai's Zone 9a habitat. 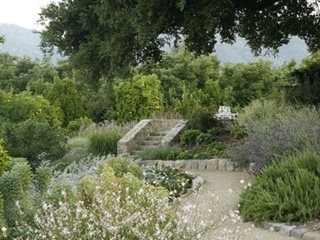 Their palette satisfies Mary's desire for a "lush and soft" appearance while ensuring that the garden can endure the seasonal weather extremes of Ojai. It's no coincidence that the nearby mountains are reflected in the garden's romantic tapestry of purple-blue flowers and feathery or bold textures of silver, burgundy and lime-colored foliage.

"Because of her background, Mary has historically loved cottage-style gardens," Ainsworth explains. "This garden in Ojai has helped her become more familiar with drought tolerant and Mediterranean plants." And it's a dreamy escape that draws Mary and Ted outside as often as possible. 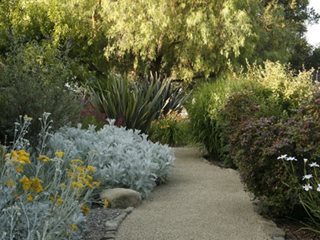 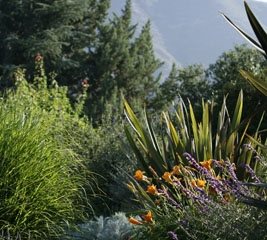 See more pictures of this garden.