A Pool by Jungle & Sea

When São Paulo-based architect and landscape designer Paulo Pratti was hired to design the garden of this condo in Laranjeiras, some two hours south of Rio de Janeiro, he was inspired by the gardens of Burle Marx, a great influence on his work, yet he also visualized the cascading jungle of Rio’s hills as a dramatic backdrop straight out of a Margaret Mee painting. In the world of the great English botanical artist who explored the Amazon region in the late-1950s and 1960s, giant fuchsia blossoms erupt from tree branches in inky forests growing on river hollows. Mee, a great influence on Pratti, captures the elusive spirit of the forest and makes us want to get lost in it, even without mosquito repellent. The design fuses Marx’s gardens with Mee’s essence of the Amazon and hybridizes it with a pinch of Indonesian simplicity. 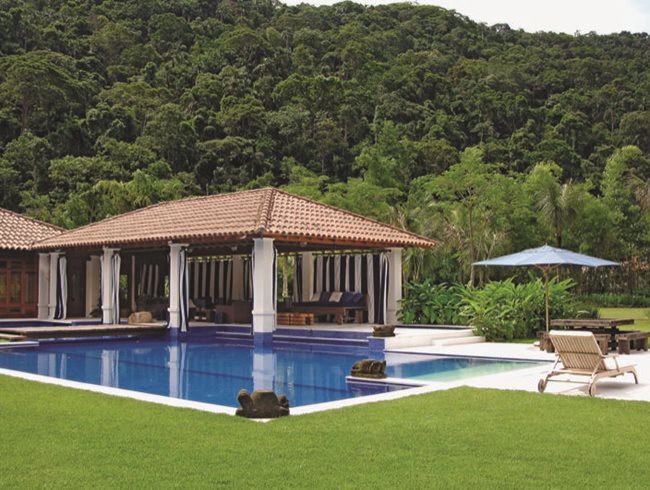 The jungle of Rio de Janeiro's hills practically cascades down into the magnificent pool and its pavilion. All of the fabrics in the open pavilions are blue and white. "It brings the ocean in," says designer Paulo Pratti.  Photo by: Romulo Fialdini.

After Pratti was hired to design the house and garden in 2006, his client asked him to look at the Four Seasons resorts in Bali for inspiration. The rooms in the home are built as open bungalows around an enormous 95,100-gallon swimming pool, which in turn cools the house in summer. This is not just a pool to be seen lounging beside wearing a tiny piece of stretchy material, without ever getting wet. It isn’t only a pool where one glides like a swan and quickly comes out the other end. This is the kind of pool where Burt Lancaster would have thrived — think of Ned from The Swimmer — accompanied by many nymphets. Wooden bridges over the pool connect sleeping quarters with partying and lounging pavilions, making the estate “feel like a hotel or a club,” as Pratti explains, “constantly filled with visitors.” The latter part of this concept is most decidedly Brazilian. 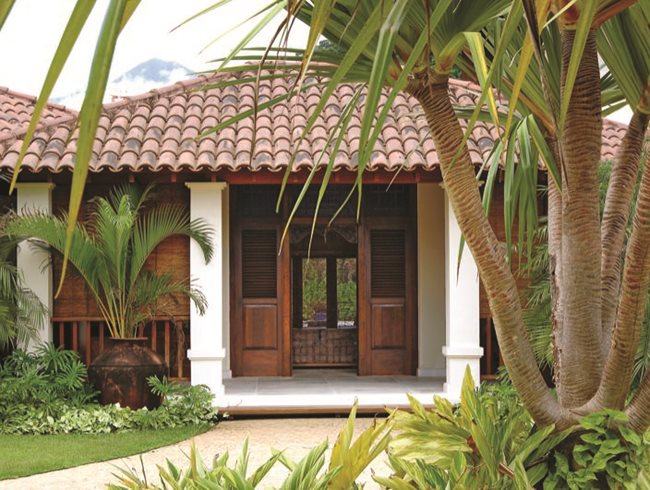 The mature Dracaena arborea across from the main entrance. Photo by: Romulo Fialdini.

The sparing use of walls creates an almost osmotic exchange between the outdoors and indoors. Even the few surrounding stone walls of the main lodge are planted with micro-orchids in between the stones, as if the entire structure were overrun by nature. Beyond the pavilions, the more than 32,000-square-foot garden is predominantly green year-round, with touches of yellows and reds from bromeliads, and pinks and purples from Laelia and Cattleya orchids growing on trees and over stone walls. Many of these plants, including some of the tall queen palms, arrived by boat or helicopter, since the condominium “doesn’t really have good road access,” Pratti explains. To achieve true genius-of-place status, he partnered with Jose Vila, an area nurseryman with more than 30 years of experience growing regional plants, to plan the garden. Vila’s passion for local flora is obvious, since 2,000 square feet of the garden is planted with species of Heliconia. Their hanging fire-red flowers also feed hundreds of hummingbirds and southern lapwings, which thrive in the pesticide-free garden. From the start of the project, Vila and Pratti’s emphasis was on caring for the environment. The pool is free of chemicals, relying on a copper filter instead, and all lumber used in the house is repurposed cumaru, an alternative to mahogany. 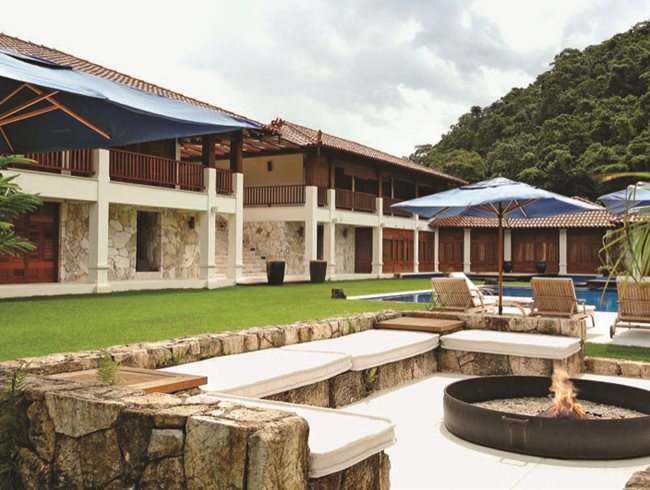 A view of the lawn where guests gather around the open bonfire after sunset. Photo by: Romulo Fialdini.

The centerpiece of the garden is an old Dracaena arborea from the house where the original owner’s mother lived. When his mother passed away, he brought it to his new home and placed it in a spot easily visible from the bungalows. But the most unexpected part of Vila and Pratti’s design is a private garden with a daybed and magnificent pink bromeliads, set between the master bedroom and bathroom, which the owner alone can access.

Some 900 feet from the edge of the property sits a white sandy beach and the Atlantic Ocean, in case the pool is not enough. And if walking seems too stressful, the house comes with a golf cart to move around the property — powered by solar energy, because Rio is all about the sun.