In one way or another, art is about transformation, about revealing the miraculous. But with so much coming at us - so much posturing as art that is really no more than its advertisement - it’s easy to forget. But Leo Laniado keeps his eye on the ball. An intellectual in the true sense of the word, he is a thinker, a born storyteller, a man at once warm and jovial who will suddenly weave into conversation some line from T.S. Eliot or William Butler Yeats and then turn sullen, unsure he is able to set things right in the gardens he makes throughout South America. “I have clients who ask for gardens, but I want to give them works of art,” says Laniado, as he sits in the office of his atelier in São Paulo, Brazil. The office’s Portuguese name, A Estufa, is an apt synonym for both a greenhouse and an incubator. “As an artist and as a person, you are always in a check-and-balance situation. You never want to be invaded, or to invade,” he explains. “So for me, garden making is never about decorating a space. It’s about establishing relationships, the right measure between objects. Instead of putting things in, it’s about unveiling what’s there.” 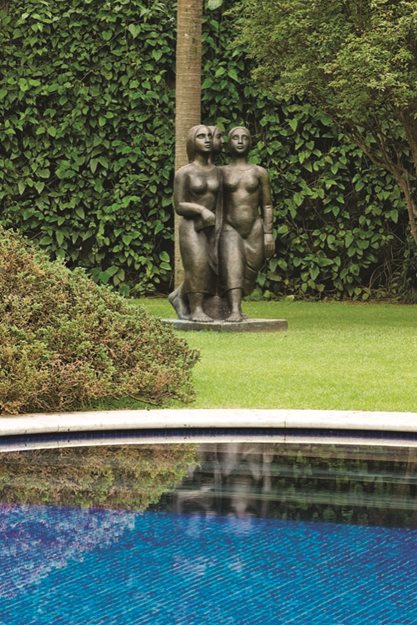 Lasar Segall’s sculpture The Three Graces seems to walk hand in hand toward the pool, where cobalt-blue glass mosaic tiles intensify reflections on the surface of the water. Photo by: Jon Whittle.

It’s fair to say that Laniado accomplished his goal in the São Paulo garden of Silvana Tinelli. A senior partner in one of Brazil’s largest advertising firms, she, like the designer, is an Egyptian-born Italian, was raised in Italy, and now holds both Italian and Brazilian citizenships. It’s as if the two were fated to meet. Several years back she decided she wanted a new home in the city, so she went to Laniado - who had already designed several gardens for her in the country - with the idea of building a Tuscan-inspired house. But Laniado dissuaded her: “Listen,” he said, “you are very much in the public eye here, and the best way you can represent yourself is to build a contemporary Brazilian-style house - first because we are contemporary, and second because you are an opinion maker.” He went on to introduce her to Isay Weinfeld, a Brazilian architect whose abstract buildings, like the acclaimed Hotel Fasano in São Paulo, are bright lights flashed onto the international scene. The product of their close collaboration is a 7,000-square-foot open-air house made of layered stone, marble and masonry set in constant conversation with the garden that surrounds it.

The upscale neighborhoods of São Paulo are not unlike the Hamptons - each property is so guarded from view that it is impossible to see the house and garden from the street. Inside Tinelli’s gates, the private viewing begins with a tableau in which the towering front door - made from the handsome, native hardwood ipe - is matched alongside a tropical flame tree, Delonix regia, that arches its lacy fernlike leaves over a single rounded azalea. With a Zen-like simplicity, the composition acts like a prelude to a symphony one doesn’t quite realize is about to begin. 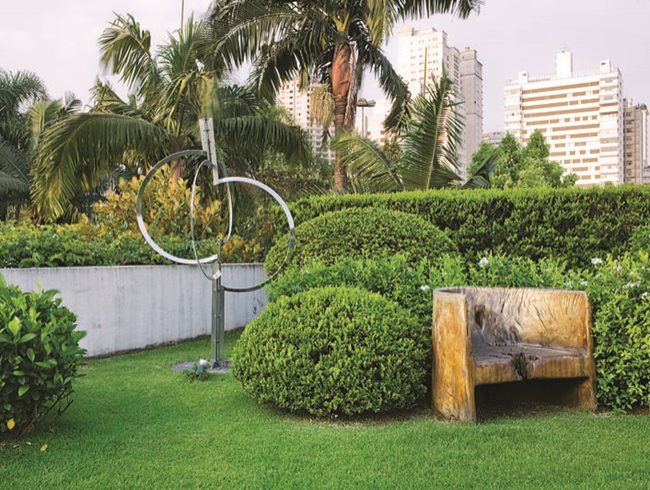 The rooftop garden reached from indoors and by the exterior stairs sports a view of the São Paulo cityscape beyond. The Hugo França chair carved from yellow pequi reiterates the spherical shapes of the evergreen azaleas, Calliandra haematocephala ‘Alba’, and boxwood, as does the stainless-steel mobile by Brazilian sculptor Cleber Machado. Photo by: Jon Whittle.

Following the flow of the landscape around to the side yard, one isn’t prepared for what happens next:  A monumental ceramic pyramid placed in the middle of the lawn needs more than a moment to take in. Two clipped azaleas planted on either side of huge sliding doors form a relationship with the pyramid that repeats the triangular shape of the pyramid itself. Then beyond the pyramid is another three-way conversation, this time with a Calliandra haematocephala, a pink powder-puff shrub, placed against the wall of the house next to a dramatic set of stairs that run up to the roof. The combination is so right that it takes your breath away. It’s what Laniado calls an “unequivocal relationship,” that for him conjures up the golden mean. 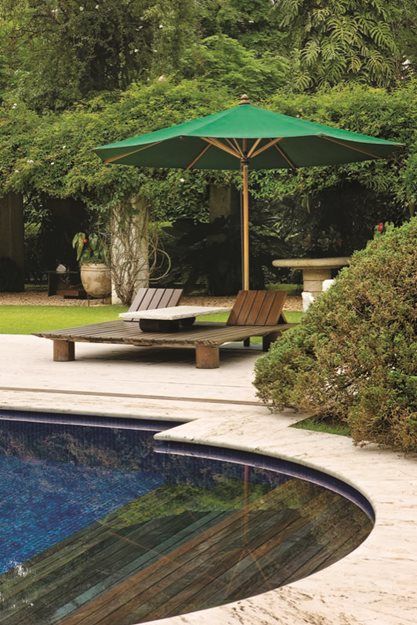 The double chaises and the curve of the pruned azalea echo the shape of the reflecting pool. Photo by: Jon Whittle.

Laniado likes to describe the sculptures he has chosen for the garden as having a totality to them, by which he means they encourage the viewer to walk around them and view them in every way. Like Donald Judd, he is as interested in the space between and around objects as he is in the objects themselves; he is interested in the resonance of objects in space, and as such uses the landscape as his primary medium. “The spaces have a rounded feeling to them, and in an abstract way, become spherical,” says Laniado, who addresses the landscape like a sculptor, always working against the flatness of space and revealing its mysteries - whether in the edges of the blue mosaic pool, the poolside bench, the pruned azaleas that inhabit the garden like sculpture or in the curve of the landscape that wraps around the house like an arm around a waist.

Out of respect for the architect, Laniado built a free-standing pergola along the back of the garden to echo the dimensions of the terrace that Weinfeld built across from it, along the side of the house. Like the terrace, the pergola accommodates furniture and sculpture, and when Tinelli and her guests sit or dine underneath its roof, they are able to appreciate the view of the house from a different perspective. The harmony between landscape and house, between the animate and the inanimate, and between nature and man are the themes of this garden, which are repeated at every juncture - like a couple who can’t help but talk to and look at and listen to each other.