Washington landscape designer Richard Hartlage makes a pilgrimage to Brazil to get a firsthand view of the gardens and public spaces designed by modernist landscape architect Roberto Burle Marx. By Richard Hartlage

Some 20 years ago I had the chance of a lifetime to meet Roberto Burle Marx in Louisville, Kentucky. Late in his six-decade career (he died in 1994), he was there to discuss designing a botanic garden that never would come to fruition. I was a student of horticulture and had no real idea who he was or the magnitude of his importance to landscape architecture. He was gracious and solicitous of my studies and interests-and even invited me to visit him in Brazil. Too bad I never took advantage of that invitation. But 20 years later I joined my good friend Jerry Harpur, noted British garden photographer, in Rio de Janeiro to see Burle Marx’s public and private commissions firsthand. 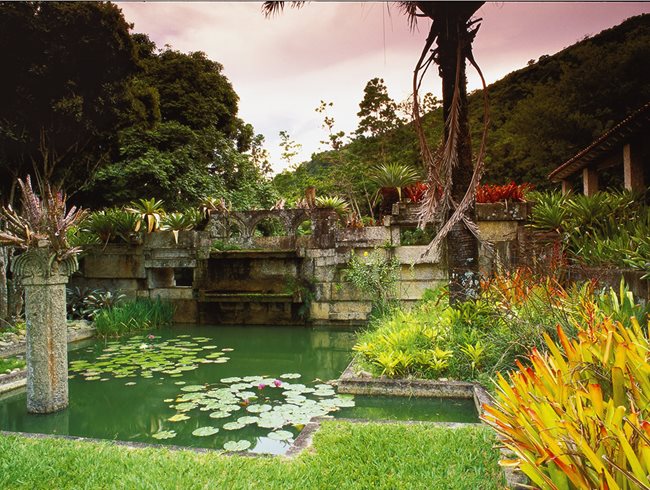 The garden pool at Sitio made with salvaged architectural stone. Photo by: Richard Hartlage.

While I was studying garden design, Burle Marx became a hero to me, a landscape architect to learn from and emulate. My trip to Rio was to see, study and better understand his work. So did the gardens I saw there live up to the legend? Sad to say, much of his public work is not well-maintained. Exceptions are the walks along the Copacabana and Flamengo beaches, I suspect because they are prominent tourist destinations. But we also visited private gardens in fine shape and thrilling to experience. 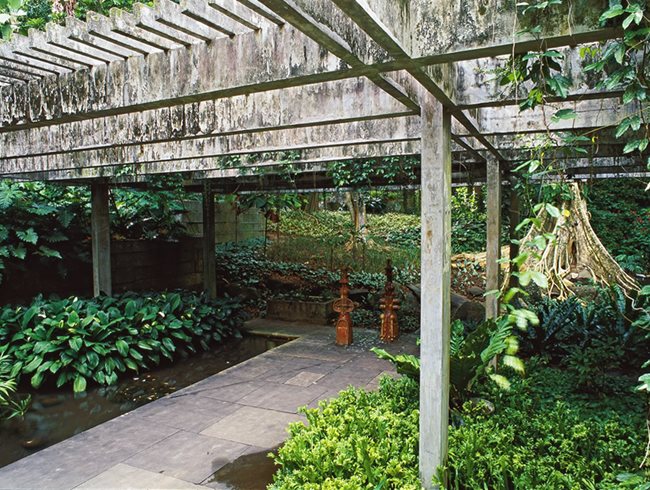 At Sitio, a concrete arbor defines an entertaining area. Photo by: Richard Hartlage.

What becomes immediately apparent is that Burle Marx was a painter working in landscape. The patterns he created with paving and bed shapes and his architectural forms dominate his work. They are bold and joyous, and they celebrate the modern city that Rio was developing into during the early part of Burle Marx’s career. 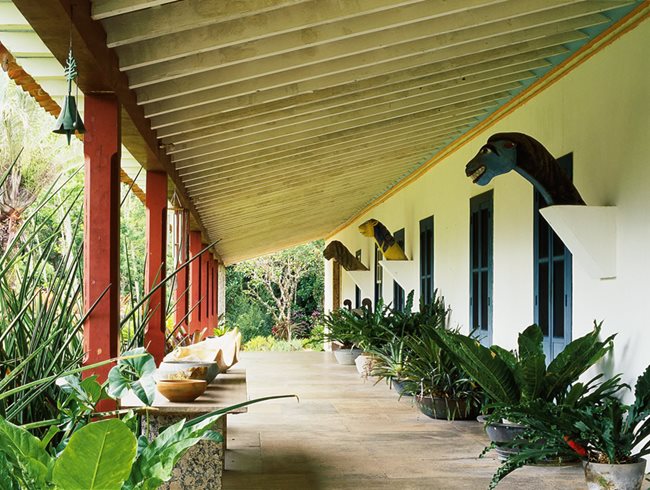 His gardens at the Ministry of Education and the Modern Art Museum in Rio have not fared well. They are neglected, but I was still impressed with the layouts and the grand scale of the pools, terraces and various landscape elements. Burle Marx’s command of construction materials and their innovative use was as dynamic as his use of plants, for which he is internationally renowned. 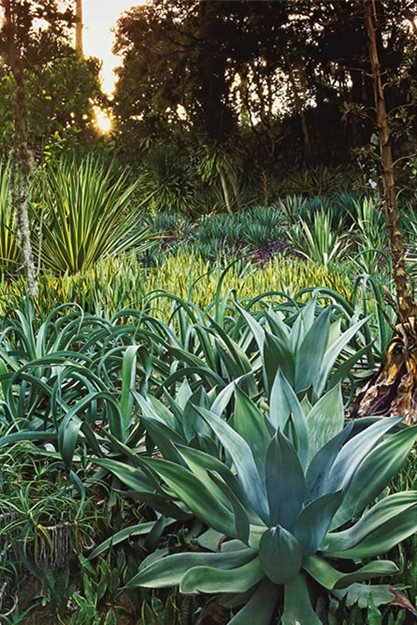 We had an opportunity to visit three private gardens-truly inspiring in their layouts, use of architecture and architectural elements. Burle Marx’s planting design was far more complex in these because residential clients generally have a stronger commitment to excellence in maintenance. 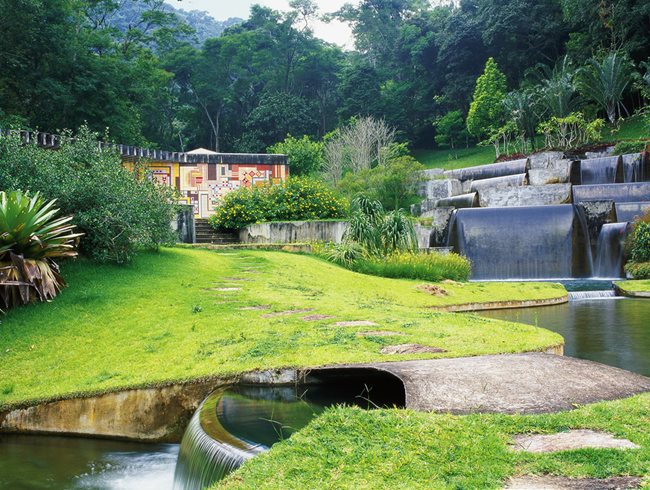 The garden at Montero displays Burle Marx touches—sinuous landscape, dynamic water—though designers from his office created this section after his death.

"At Montero Burle Marx choreographed the disciplines of landscape architecture, botany and horticulture to create a garden that unrolled before me in a tour de force that I will remember for the rest of my life," says Hartlage. Photo by: Richard Hartlage.

The Strunk garden was my favorite. Built as a weekend home, in nearby Petrópolis in 1954, the house was designed by Burle Marx’s lifelong friend, architect Oscar Niemeyer. The bold use of a checkerboard-patterned lawn and tender bedding plants created striking painterly effects. No landscape architect today can match the diversity of the planting palette. Burle Marx was noted for exploring and using plants of his native Brazil and instrumental in advocating the preservation and awareness of native flora. At the same time, he voraciously sought and experimented with adaptable and dynamic plants from all over the world. 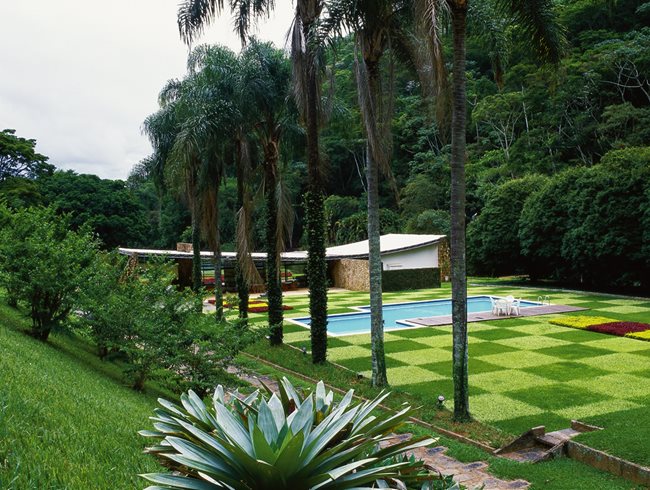 Burle Marx’s love of plants was most apparent at his home, Sitio Santo Antonio da Bica, now owned by the state and superbly managed. It was his own private botanical garden, laboratory, and nursery to supply his commissions. I was totally surprised at the extensive use of liriope and ophiopogon, both Asian plants that are very common groundcovers in the milder areas of the United States. Burle Marx was not a plant snob. He kept in mind his end goal to create artful, dynamic landscapes and was willing to use whatever plants he had at his disposal, be they common or extraordinarily rare, as long as they were easy to grow and manage. 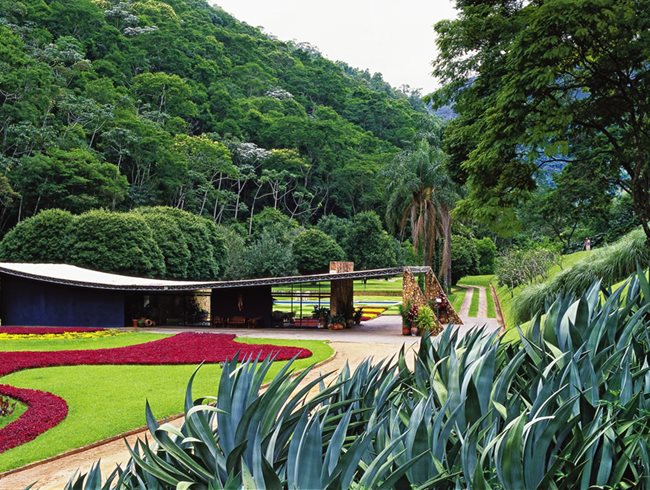 Reflecting on our pilgrimage, I am struck by how relevant Burle Marx’s gardens are today. His bold approach offers us an alternative to the complicated English cottage style of planting. It does not sacrifice variety but rather embraces plant diversity. I could not help but see his influence in the work of some of the most accomplished landscape architects practicing today, such as Raymond Jungles and the firm Oehme, van Sweden. I am more convinced than ever, we have not taken Burle Marx’s legacy far enough. There is still much to learn from his synthesis of art, architecture, and love of plants to create gardens that inspire and celebrate contemporary culture.