Perched between forest and the sea, a noted tastemaker in Brazil finds solitude and serenity in her elegant weekend home By Timothy Jack Ward

Far from the madding crowd of the third-largest city on the planet - São Paulo - is the seaside villa of the chic Brazilian designer Ana Maria Vieira Santos. Affording a bird’s-eye view of an azure Atlantic inlet, it is cloaked by the lush forest preserve of the Mata Atlântica. 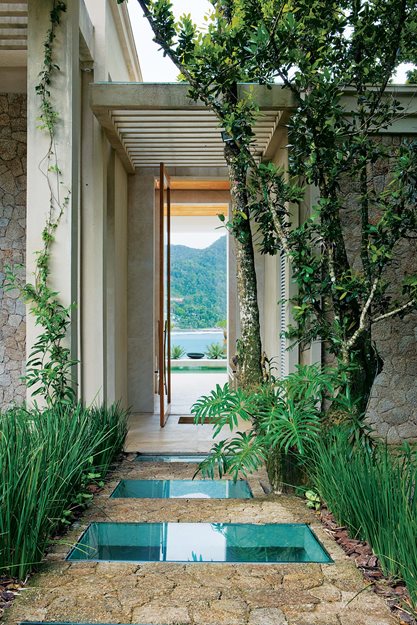 From the entry path made of Moledo stone and glass, and through 15-foot-tall doors, the sea beyond and gardens below are visible. Photo by: Jon Whittle.

Every Friday afternoon, Santos cranks up the “ambient chill music” in her shiny black Toyota Hilux as her driver makes the 90-minute trip from the congested city streets to this extraordinary garden paradise of her own design. Chill indeed on a hillside, Santos’ four-story poured-concrete and limestone home architecturally cascades toward the sea. Yin from yang, it is transcendent tropical seclusion - the antithesis of the almost unrivalled urban sprawl of São Paolo.

Known simply as Ana to her friends, Santos has been in the business of design for 35 years. In addition to her architecture and interior design, she operates two home furnishings showrooms in São Paolo. Her current projects include a spa in Qatar and a home in Rio de Janeiro state with gardens originally designed by Roberto Burle Marx. 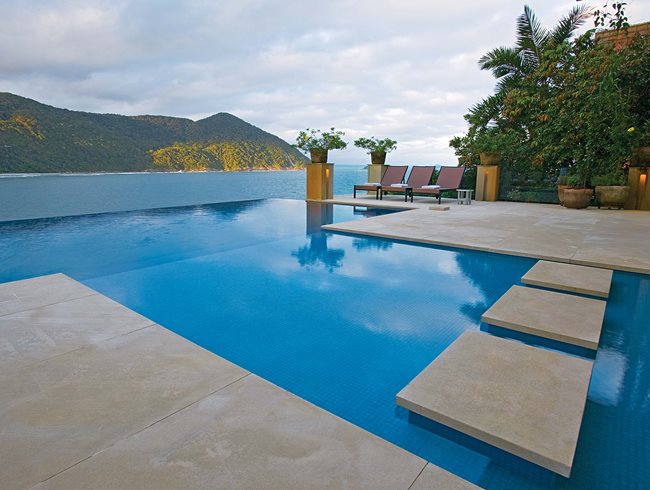 Centered in limestone terraces, the pool appears to spill into the sea. Photo by: Jon Whittle.

LAYOUT: The entrance to the eight-bedroom, over 4,200-square-foot Villa Santos is at the upper level of the four-story house, built against a hillside perched over the sea. As you approach, there is a stunning stone path with three-foot-square glass panels, through which is revealed a subterranean tropical-plants garden which includes cut-leaf and flask philodendrons, Vriesea imperialis bromeliads and Anthurium crystallinum. Ana Maria also displays her collection of orchids - an array that includes cattleyas, miltonias, oncidiums and vandas - about which she is passionate.

At the rear of the house, Santos designed an east-facing terrace to frame a small pool, first just one foot deep and 12 feet square, broadening to full size and depth. The infinity-edge pool appears to join the sea, as though the villa were itself floating. 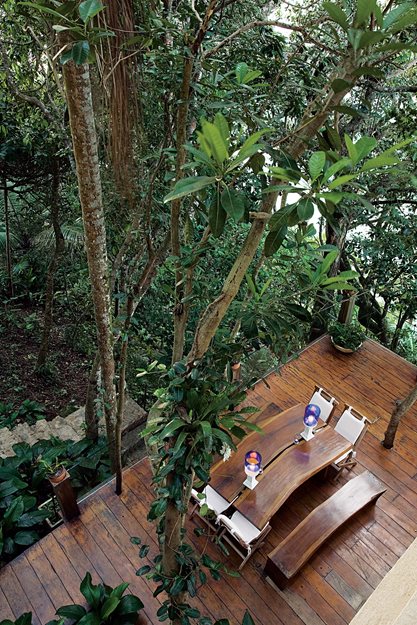 Sheltered under the canopy of a forest preserve, Ana Maria Santos’ outdoor dining room table and terrace were both made using salvaged wood from her home state of Minas Gerais in Brazil. Photo by: Jon Whittle.

MATERIALS: The Santos home is built of poured concrete, with limestone floors and terraces that remain cool underfoot in a very hot climate. For the forested dining terrace, Ana Maria salvaged broad timbers from Tiradentes, a colonial town established in 1702 in Minas Gerais state. The precious and ancient boards were used for decking and to make the dining table and chairs. A procession of handmade plant containers, on concrete pedestals, are actually salvaged antique alguidares, richly patinated vessels made of fired clay and originally used in the north of Brazil to cook and carry meals. A brown stone, Moledo, paves the garden paths.

STYLE: Known for her strong smile and high energy, Santos is a fashion plate and society figure in São Paolo. Her equally chic outdoor life reflects her stylish restraint, with a bit of tongue-in-cheek design humor thrown in. For example, the surreal negative spaces in the glass walkway are echoed, in reverse, by the three similarly proportioned limestone stepping stones that seem improbably to walk on water in the serene pool.

In magical evening light, an ornamental fountain, framed by agaves and also visible from the entrance of the house adds a touch of minimalist ceremony to Santos’ limestone pool terrace and footbridge. Photo by: Jon Whittle.

PLANTS: For contemporary homes like her own, Santos prefers simple, locally adapted plants like bamboo palm, moso bamboo (Phyllostachys pubescens) and Renealmia brasiliensis. The entrance walk is bordered with a fringe of Dietes bicolor. Antique containers are filled with sprawling oleander (locally called espirradeira). A pair of agaves frame an ornamental fountain, flanked by potted allamandas atop pedestals. Near the spa, Santos’ orchid collection is sheltered from the climate of Guarujá, the island where the house is located. Moss-covered alguidares filled with oleanders partition the open-plan terraces.

FURNISHINGS: With an editor’s precision, Ana Maria furnishes her gardens with austere and sleek furniture of her own design, such as the trio of steel chaise longues, painted black and upholstered with woven synthetic fiber. Many are production pieces that are also offered at her store, Ana Maria Vieira Santos Casa in São Paolo. The outdoor dining furniture, made of wide salvaged boards, recalls the work of George Nakashima and could not be more at home than under the shelter of the surrounding forest preserve.

OVERHEAD: According to colleagues, the elegant Ana Maria is known to privately dance by her seaside pool. It is a joyful thing to imagine. By keeping it simple, celebrating the spare, Santos has created and furnished a home that is a happy bridge between the lush forest and the shimmering sea.