We don't know who the first gardener was to look at a boxwood shrub and see its inner cube, but we do know that the urge to clip plants into pleasing shapes goes back a long way. Those first topiary artists also fostered something else—the abiding, perhaps the central, debate in garden design: Is it finer to control nature or merely to emulate it? Advocates of topiary laud not just the idea of plant sculpture, but the skill required to achieve and sustain it. Detractors have regarded topiary as pompous or at least childish. 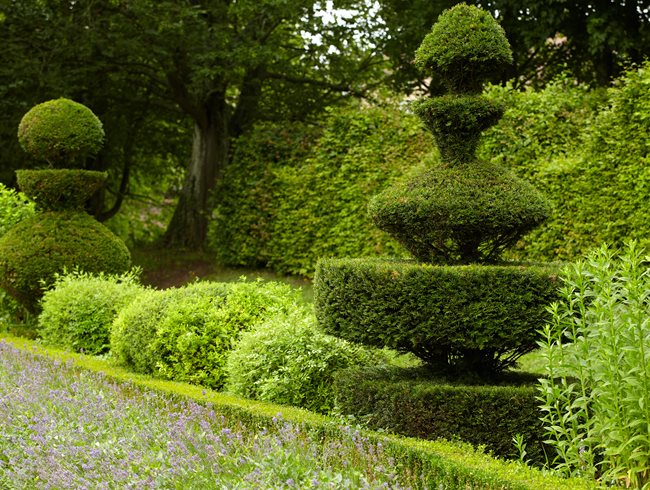 To purists, topiary is the training of vegetation, usually broadleaf evergreens or conifers, into geometric or representative forms. Often this involves growing selected shoots on wire armatures. Pliny the Elder, in the first century a.d., observed topiary hunting scenes, armadas, and other plants “clipped into innumerable shapes,” including letters spelling the gardener's or master's name. In Japan, clipped shrubbery took its own iconic shapes, as cloud-pruned azaleas or, in temple gardens, as deities.

In addition to box, the Romans used cypress, too tender for northern Europeans, who turned to yew, which went on to become the dominant material in New World topiary gardens, such as the one at Longwood Gardens in southeastern Pennsylvania. There, approximately 50 topiaries are clipped in summer, after the annual spring flush. This permits gardeners to keep the topiaries well formed while using new growth to fill in gaps caused by winter storms.

As formal gardens reached their zenith in the palace gardens of 17th-century France, topiary became an integral element of this almost sacred homage to the rationality of mathematics. But who likes math? For English polemicists like Alexander Pope, the yew obelisk served as a lightning rod. He spoofed a sale notice of topiary, a “catalogue of greens” that included “The Tower of Babel not yet finished…A pair of Giants, stunted, to be sold cheap” and a “quickset Hog, shot up into a Porcupine, by being forgot a week in rainy Weather.”

Or as his contemporary Joseph Addison wrote, “We see the marks of the Scissars upon every Plant and Bush.”

If topiary again became unfashionable in our time, it was because of practical, not ideological, reasons: Topiary didn't mesh with cultural shifts to transience and impatience. It takes several years to hatch a green peacock, and an annual clipping to stop it from turning into a hairy squirrel. But topiary never went away, and in many gardens, the art form is enjoying a 21st-century revival.

Contemporary landscape architects like Jacques Wirtz and Erik Dhont in Belgium and Dutch garden designer Piet Oudolf sculpt hedges with a topiary-like sensibility. For Oudolf, who famously goes to town with herbaceous plants, it is the clipped forms that become an essential counterpoint to the dancing grasses and perennials. “It's the tension between the two that fascinates me,” he says. Topiary, he maintains, is a relevant landscape feature that is not at all stuck in the past. “Control is something deep in human beings,” he says. “Topiary will always be there. It's the ultimate form of control.”

Shop for topiary frames on Amazon.