The Work of Sculptor Stan Bitters

Stan Bitters is a 21st-century caveman. In a windowless steel building on an industrial strip of Fresno, California, the 76-year-old sculptor shapes earth, water, and fire into primal ceramic forms. It is a ritual based more on instinct than intellectual precept. “It’s not about thinking about the clay,” he says. “It’s really getting in there and manipulating it—mashing it and beating it—until it produces some feeling of wonderfulness, something earthy and textural.” 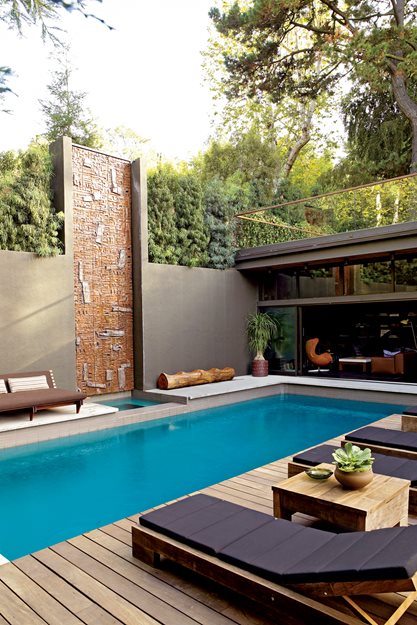 Bitters’ art bears the mark of his own two hands, often quite literally. “Stan’s work is special because you can see the process,” says Pamela Shamshiri, a partner at the Los Angeles design collective Commune who has commissioned Bitters’ work for residential interiors, gardens, and the Ace Hotel in Palm Springs, California. “I mean, his thumbprints are in it.”

As a pioneer of the organic modernist craft movement in the 1960s, Bitters has been producing rough-hewn ceramic birdhouses, planters, pedestals, mural tiles, totems, boulder walls, and fountains for more than half a century. He has mesmerized architects, landscapers, and collectors from the start but was recently discovered by a hip new audience. Actress Cameron Diaz has a Bitters water wall at her beach house, and Commune commissioned him to create a group of two-story fireplaces that are focal points at the Ace Hotel.

Bitters’ work is particularly popular in Southern California, fitting in with homes that range in style from modern to Mediterranean. John Heiden, owner of the Los Angeles graphics firm Smog Design, put pedestals made by Bitters onto his flagstone-paved patio and topped them with his bonsai collection. Stephen Kaufman, a political law attorney, moved a Bitters wall sculpture from one house to his current residence in Los Feliz. “We had it reconstructed as a free-standing piece,” Kaufman says. “It complements the garden, but when you look out at it from inside, it appears to be an extension of the house.” 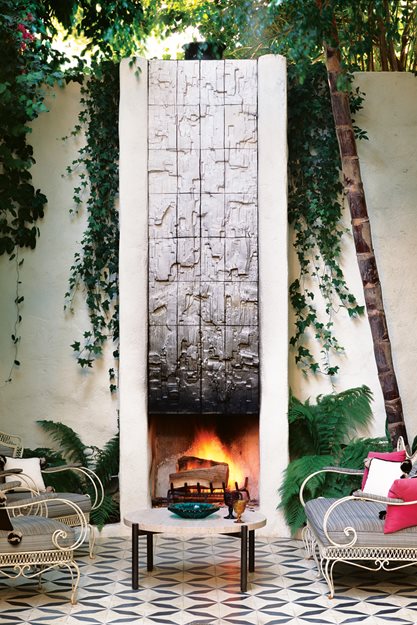 A ceramic tile and stucco fireplace frieze is the starkly vertical focal point of this Los Angeles garden, designed by the Commune design collective. Commune commissioned Bitters to create a mural that would accent the garden’s high walls, which were erected to provide privacy, hide the noise from pool mechanics, and create the feeling of a sunken courtyard. “The scale of his work is incredible,” says Commune’s Pamela Shamshiri. “He has taken ceramic art and pushed it to its limits.” Photo by: Lisa Romerein.

Landscape designer Matthew Brown says Bitters’ work is more about a place-the mountain and desert landscapes of California-than a time period. “His pieces are so of nature that they fit in seamlessly in a garden,” Brown says. “You might not even notice his work at first, but when you do it really feels part of the outdoor experience.”

Bitters earned a bachelor’s degree in painting from UCLA, but he chose a different path in 1959 when he signed on as a designer for Hans Sumpf, at that time the world’s largest producer of adobe brick. “They gave me 20 tons of clay,” he recalls, “and asked me to produce a sellable object.” He made birdhouses, pots, tiles, and enormous planters for shopping malls. He also explored the architectural application of his work with friezes and clay tiles that could be strung together and used as room dividers indoors and as large-scale wind chimes outside.

Sizable commissions followed, including an iconic fountain titled Dancing Waters in a shopping mall designed by landscape architect Garrett Eckbo. In 1969, Bitters completed a fantastical 300-foot-long high-relief mural for the Fresno headquarters of Duncan Ceramic Arts, a manufacturer of products for hobbyist potters. The mural featured circular medallions in carnival colors, elements that intentionally echoed folkloric Scandinavian and Mexican crafts, the work of designer Alexander Girard, and the optimism of the hippie era. 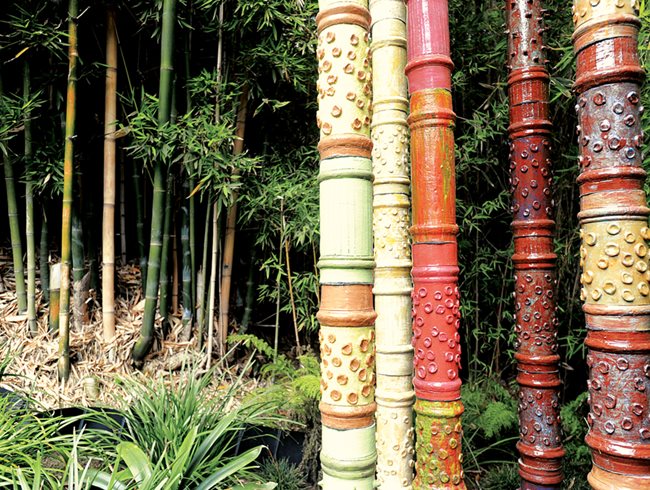 Bamboolike totems with actual bamboo in the background. Photo by: Michael Wilkinson.

Another inspiration, Bitters says, is “the gestural attitude” of abstract expressionist ceramist Peter Voulkos. “He showed what could be imparted in clay,” Bitters says. “Having grown up in Fresno where Duncan was really the scene with its little ashtrays, his work was a mind-blower. He awakened an energy that compelled me to do natural, organic work on a large scale.”

Bitters documented his process and work in the 1976 book Environmental Ceramics, which has since been reissued and serves as a textbook of sorts for his clients. “There were a lot of how-to books at the time, and my quest was to enlarge the thinking and capacity to go beyond making the small hand-held teacup,” he explains. “I saw ceramics as a centerpiece - indoors or outdoors - something that lasts forever with texture and color that engages you visually and physically, a presence that can be felt and touched. In contrast to pristine marble and bronze sculptures you set aside to view from a distance, my material allows you to be involved in it.”

With the advent of what Bitters calls “glass box” architecture in the 1980s and 1990s, the artist felt pushed aside but continued to pursue his sculptural work. But in the last decade, a revival of interest in post-and-beam and case study architecture as well as midcentury modern interiors and gardens prompted a rediscovery of Bitters’ handmade work. His vintage pieces began to fetch premium prices at Los Angeles galleries like Reform, which sold giant thumb pots (named for the textured pattern imparted by Bitters’ thumbs) for up to $5,000 each.

In 2001, artist representative Scott Nadeau, owner of Ten 10 Design in Los Angeles, found a Bitters piece among midcentury pottery he was buying from an estate. Intrigued by its form, he tracked Bitters down and has since placed Bitters’ work in galleries, including a current show (through June) at Found on Melrose Avenue. He’s also the artist’s rep for more than two dozen residential commissions.

“I’ve always been hip,” says Bitters, laughing. “It was just a matter of being found. I am finally being recognized and people are aware that I am not dead yet.”

Far from it. In addition to clay, Bitters works in bronze and stainless steel and just completed his first fountain made from concrete and colored glass for a downtown Los Angeles high-rise. He hopes to travel one day to the Turkish archaeological site at Göbekli Tepe to view the 12,000-year-old carved limestone columns recently unearthed there. “They had just come out of the caves,” he says of the unknown carvers’ place on the evolutionary timeline. “I was blown away by how much they copied what I was doing with my monoliths in the late 1960s.”

This is humor, not hubris, Bitters-style. The sculptor, who happily calls himself an “old hippie” and describes events as “happenings,” feels a creative kinship with the first artists. “I imagine a caveman sitting by the fire, looking at his drawings on the wall and thinking about what he has done for his environment,” he says. “I’m an organic man. I sit with the caveman. It’s where I am comfortable.”

Check out ten10site.com for additional designs and art by Stan Bitters. Get up close and personal with Bitters' work at the Ace Hotel Palm Springs (acehotel.com/palmsprings).

This article appeared in the June 2012 issue as "An Artist's Touch."