The Zen of Rock Balancing

As it turns out, you don't need sleight of hand or even mud to design gravity-defying cairns. You do need a bit of patience, though, and a knack for "knowing the rocks," according to Michael Grab, a land artist who has been balancing rocks since 2008. He builds his sculptures with rocks from the natural landscape, usually alongside water. 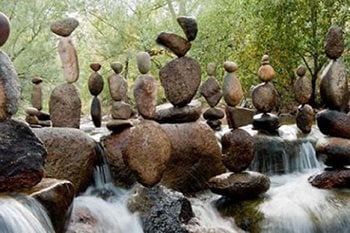 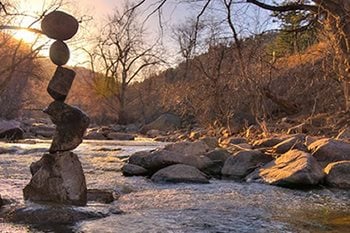 Rock balancing is an internationally recognized craft; Grab has been invited to design sculptures at rock balance festivals in Italy, Costa Rica, and Boulder, Colorado, where he spends most of his time. He writes about the different types of rock in each location: the vividly colored granite and sandstone in Boulder Creek; the uniform limestone in Ottawa; the powdery, rounded rocks in Portonova, Italy; the bubble-like forms in Cattolica, Italy, where "rocks were much harder, and therefore more forgiving to balance," writes Grab. "They also consisted mainly of an orange color in the stone, which beautifully contrasted the blue sky." 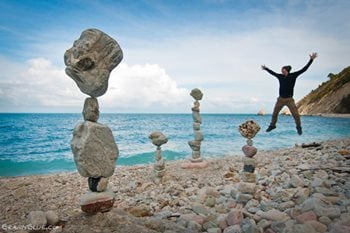 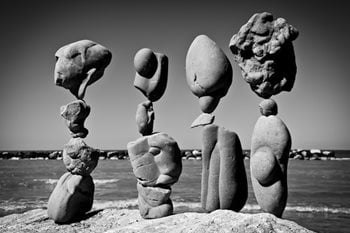 After selecting the rocks, Grab studies their surfaces. As he writes:

"The most fundamental element of balancing in a physical sense is finding some kind of 'tripod' for the rock to stand on. Every rock is covered in a variety of tiny to large indentations that can act as a tripod for the rock to stand upright, or in most orientations you can think of with other rocks. By paying close attention to the feeling of the rocks, you will start to feel even the smallest clicks as the notches of the rocks in contact are moving over one another." 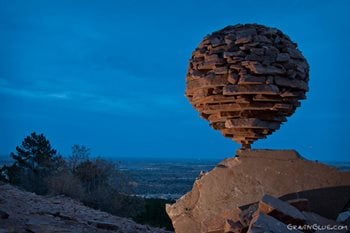 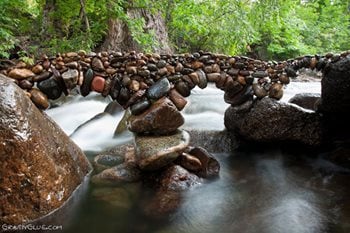 The next step, he says, is to "find a zero point, or silence within myself." Grab speaks about rock balancing with a calm fervor that verges on holistic mysticism. He finds a reflection of the world in the balanced rocks, which are “precariously sturdy, mysterious, and fragile.” To hear Grab talk about it, with its emphasis on zen focus and precise form, rock balancing could be the new meditation, or the new yoga, which begs the question: Who is holding the form? The artist or the rocks?

An interview with Michael Grab, in which he discusses how he began and several of his public performances, is here.