A Stoneworker’s Landscape Design in the Adirondacks

See the work of Lew French—a stoneworker whose creations seem to defy the laws of time and gravity—at a project in the Adirondacks where he acted as landscape and garden designer. By The Editors 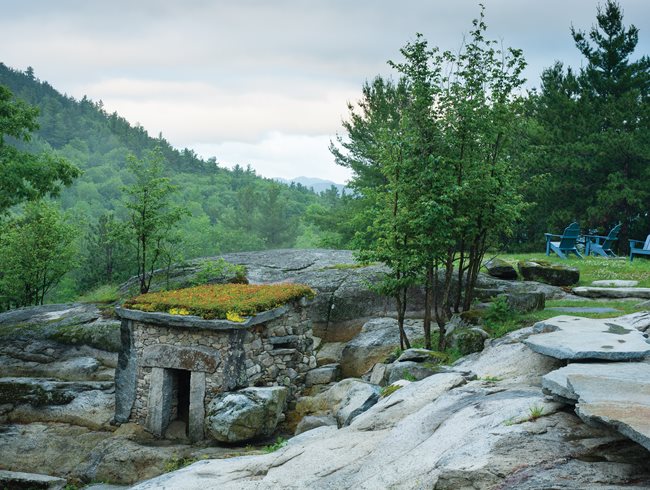 At a landscape in the Adirondacks, stoneworker Lew French built this stone hut with a green roof of mixed sedums nestled into the hillside. Photo by: Alison Shaw from Sticks & Stones: The Design of Lew French, reprinted by permission of Gibbs Smith.

Lew French, a stoneworker based on Martha’s Vineyard, builds pieces that look as if they have stood for eons. For this project, at a vacation house in the Adirondacks, French was given artistic license over the entire landscape. The property had been a ski resort in the 1960s, and the vegetation hadn’t been disturbed since. French’s task, as he saw it, was to open up views, improve sight lines, make the land navigable, and create walking trails while making it appear as if the land had been undisturbed. A focal point is the hut, which has a living roof of mixed sedums. To make it easier for the owners to get to the viewing spot, French elevated 10 to 12-foot-long slabs of granite on structural tubes to create a “floating skywalk” above the uneven ledge. 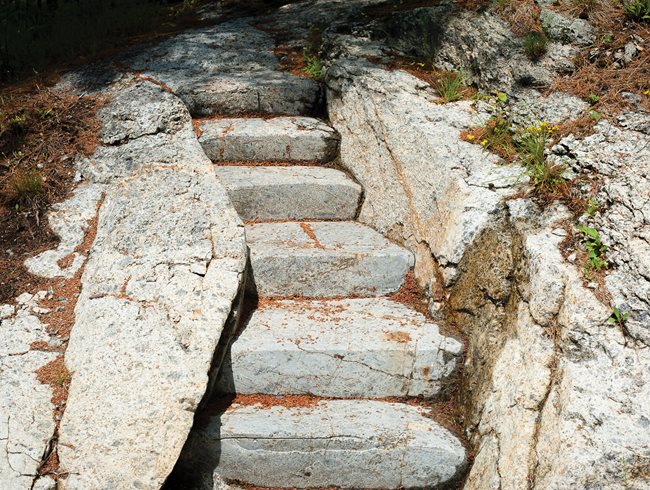 These stone steps were carved directly into the hillside by French’s friend and fellow stone artist Chance Anderson. Photo by: Alison Shaw from Sticks & Stones: The Design of Lew French, reprinted by permission of Gibbs Smith.

Working spring through fall over two years, French and a 15-person team cleared a 5-acre section near the house, stripping part of it down to a ledge to create a place to sit and view nearby Whiteface, the Olympic Mountain. Then he rebuilt and replanted. Invasive plants were replaced with ferns, Astilbe, and mosses (about half a football field’s worth, all told). Ever the perfectionist, French brought in a moss expert in order to learn more about mosses and to be sure that the ones he chose were best for the site. 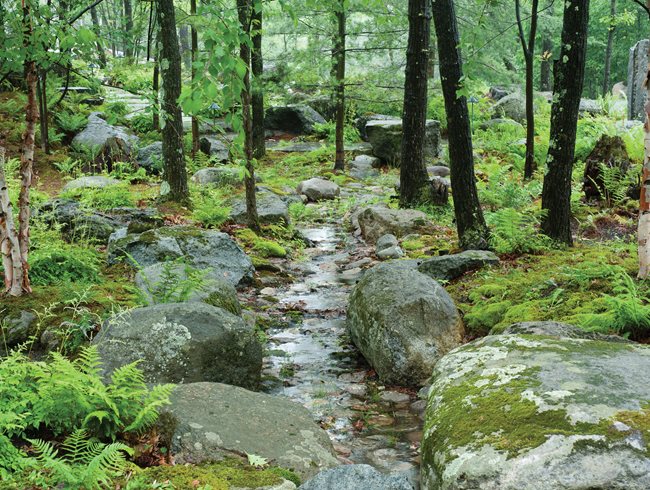 It looks like it occurred naturally, but this streambed was actually built by French. He created the seasonal waterway to carry rain and snowmelt. Photo by: Alison Shaw from Sticks & Stones: The Design of Lew French, reprinted by permission of Gibbs Smith.

A seasonal streambed that looks like it’s been there since the glaciers retreated was built using boulders left over from clearing the ski slope some 50 years earlier. “The biggest compliment is when people go out there and ask me what I did,” French says. 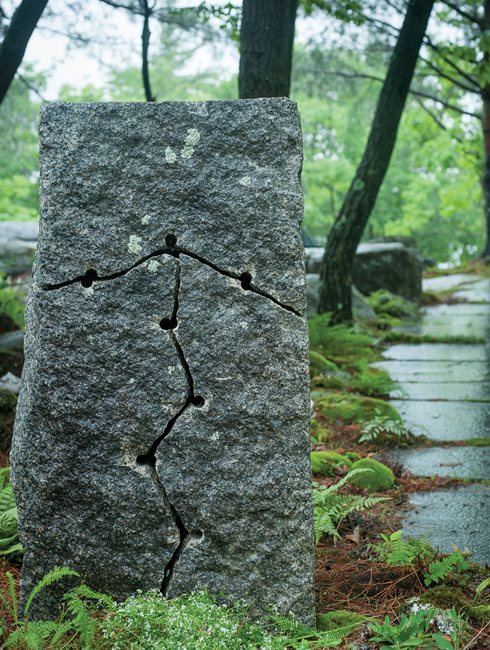 A stone sculpture at the head of a pathway. French hand-split the granite using an ancient technique called wedges and feathers. Photo by: Alison Shaw from Sticks & Stones: The Design of Lew French, reprinted by permission of Gibbs Smith.