In Belgium, proof that a restrained palette of just eight plants can have exuberant results By Jenny Andrews 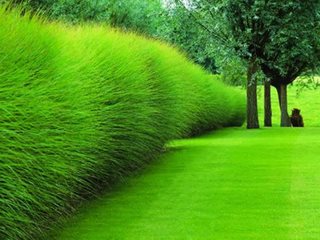 How many plants does it take to make a garden? Sounds like a good topic for a thesis-in horticulture or philosophy. Among painters, a common creative exercise is to squeeze out a discreet number of colors and from them mix everything they need: a less-is-more strategy. This is not, however, equivalent to a fighter having one hand tied behind his back. Many artists contend that a “limited palette” is the true path to understanding color and achieving a harmonious painting. Witness the mood-setting tones of Rembrandt, Picasso in his Blue Period and, Van Gogh’s sunflowers.

It’s fitting then that a garden designed for an artist in Belgium tests this same mettle, this time using plants as the medium. The result, designed by landscape architect Piet Blanckaert, is a texture masterpiece, using only a handful of ornamental grasses, shrubs, and trees (eight types of plants in all), and arranged in a way that is at once inviting and geometric, lush yet orderly. Though Blanckaert asserts he didn’t initially think in terms of numbers and parts but of the whole (as he puts it, he had only “lines and grass” in mind), in a light-bulb moment, as he says, “I knew exactly what I wanted to do and that I would only work with this, this, and this.” Although he opened his firm in Bruges 30 years ago and has designed gardens throughout Europe and in Israel (and soon plans to work with clients in the U.S.), he readily admits, “I had never designed a garden like this before, using such a restricted plant list.”

For the client, sculptor Jan Calmeyn, whose own work blends the natural with the abstract, the garden creates a proper and peaceful setting for sculptures, one that shows them off without distracting. Blanckaert also wanted to play off the farmland vernacular of the surrounding countryside, situated near Antwerp, and to exemplify what is salient about Belgian garden design—architectural hedges, symmetry, nuances of color, a sort of refined rusticity and a timeless though very modern aesthetic. In Blanckaert’s opinion, Belgian garden design is a culling and distillation of the best that other countries—England, Holland, France—have to offer. “One could say we Belgians are the same way about food—and we are known for our delicious cuisine. We enjoy all the lovely products of the countries surrounding us.”

The first step at the Calmeyn garden was to sculpt the land. This made it possible to hide a nearby road and row of shops, but it also enhanced the layering that is an integral part of the design. Creating a gentle, continuous grade, the far edge near the road is a full 9 feet higher than the garden’s level at the house. For this to be almost inconspicuous on a lot less than 2 acres in size is quite a feat. Part of the illusion is achieved with a series of levels that work their way up the hill, transecting a central axis, using alternating ribbons of trees, hedges, ornamental grasses, water features, and strips of lawn. To enhance the sense of enclosure, Blanckaert planted a staggered row of yews (Taxus baccata ‘Fastigiata’), each about 12 feet tall, at the highest edge, its deep-green foliage creating a backdrop for the rest of the garden.

Integral to the design are two neat allées of white-barked birches (Betula utilis var. jacquemontii) running parallel to the slope, whose tree canopies appear stacked when looking from the lowest point. For the other layers, Blanckaert arranged narrow, low, living walls of hornbeam (Carpinus betulus) and linear mass plantings of Miscanthus sinensis ‘Gracillimus’, M. x giganteus, Pennisetum alopecuroides and P. alopecuroides ‘Hameln’, the feathery textures of the grasses contrasting with the rigid hedges and orderly muster of trees—like stylized versions of pasture, cropland, orchard, and hedgerow. An L-shaped cluster of willows (Salix alba)—grown in Belgium for basket-weaving for centuries—with dark, textural bark and silver-backed leaves a reverse of the light-barked, dark-leaved birches, was existing and left in place by Blanckaert as an homage to the land’s former identity as a farm.

Near the house and at the base of the main axis, a simple, ground-level rectangular pool about 13 feet by 20 feet does double duty as garden ornament and swimming pool (the client likes to take daily dips), and is guarded by a bronze sculpture by Calmeyn. Farther up and running the width of the garden, a wet-weather water feature mimics the drainage ditches seen crisscrossing the low-lying rural landscape of Belgium—a “modern ditch,” as Blanckaert calls it. The ditch, like the rest of the design, easily could be taken for living sculpture, and in fact the garden’s “schema,” as Calmeyn calls it, has inspired the artist to change his sculpting style from fluid lines to blocks and more supine forms.

Though the garden is dominated by green in spring and summer, by no means is it monotonous. Blanckaert is keenly aware of color, especially in a garden with a short plant list, and made selections based on interesting bark, leaf coloration, and even seed heads. Nor is the garden static, constantly changing its look as the seasons progress, from bright-green spring growth to the golden tones of autumn with the grasses at their peak. As Calmeyn puts it: “There is always something to see—the colors, the light, the movement, the birds. Even with no flowers, you can’t believe how colorful it is. Now in spring the grasses are very young, fresh, and green, with beautiful light on them every morning. Even when it rains, it is worthwhile.” It’s no wonder that he and his wife have adopted a ritual of strolling through the garden every day.

And Blanckaert kept winter in mind as well, when the birch bark is luminously white beneath a tracery of black twigs, and the grasses are left uncut to be dusted with snow or lined with frost. Even when the grasses are sheared back in late winter or early spring, the geometric arrangement of clumps of stubble dots the garden like environmental art. This is all part of long-term thinking, which Blanckaert lists as another key element of Belgian landscape design: “A garden is meant to be beautiful now, more beautiful five years from now, and more beautiful still in 20 to 30 years.”

Even with the annual grass shearing and the tightly clipped hedges, Blanckaert says the garden is very low maintenance. Twice a year the hedges are pruned, and every four to five years the trees are neatened and shaped. And the garden needs no supplemental water, thanks to Blanckaert’s plant choices and Belgium’s ample rainfall.

Blanckaert regularly returns to visit all the landscapes he has designed, feeling that it’s important to keep checking on a garden as it grows: “When you make a garden, it’s not 100 percent correct at first, and every situation is different and can be difficult to predict. If you plant a tree or shrub, it might need to be moved later. It takes a lot of time to follow up, but it’s worth it.” In his own garden, Blanckaert admits he has repositioned some plants 10 times to get them in just the right spot. His reaction after a recent visit to the Calmeyn garden, now 10 years old: “I didn’t need to change a thing.”