The Tenuta Banna castle, with the tallest tower in Piedmont, Italy, belongs to one of the region's most beautiful estates, and its setting is the stuff of fairy tales. It presides over a lake that reflects the pale-yellow intonaco — a special kind of plaster that turns any surface into a canvas — and many small gardens where infinite roses bloom from summer through fall. It is the very evocation of a Titian painting. Twelve miles south of Torino, Tenuta Banna (tenuta means “estate” in Italian) revels in its past as much as it looks toward the future. 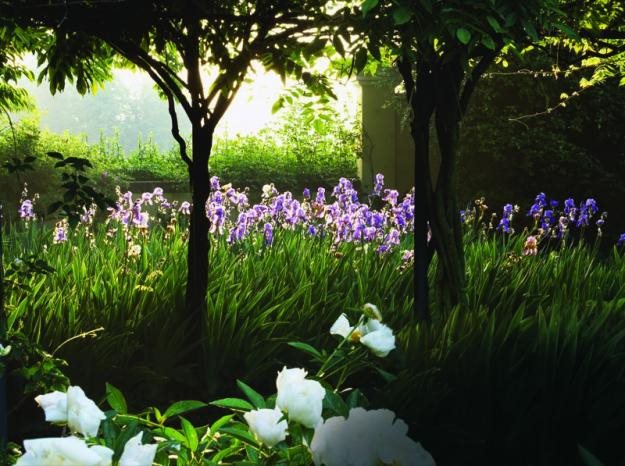 As bucolic as ever, though infinitely more democratic these days, the Banna estate was a fief in medieval times. Then, in 1785, along with its surrounding villages, Banna was named a principality that was sold many times until its present owners, the Spinola family, acquired it in the early 20th century. “The garden of Banna is a place where both Marchese and Marchesa Spinola express their love for beauty, flowers, trees and architecture,” says Paolo Pejrone, a renowned Italian landscape architect and founder of the Piedmontese Garden Academy, who in 1995 redesigned and restored the gardens of Tenuta Banna.

“The enclosed gardens are organized like a Persian carpet,” says Pejrone. “I picked a very childish manner of doing the garden: simply, and a little whimsically.” The landscape is organized into five walled gardens arranged into an L-shape around a larger rectangular courtyard, flanked by the castle and the tower on one side, and 691 acres of farm on the other, where hay is left growing tall in the fall and daffodils announce the arrival of spring in sweeping masses. There are white and red oaks, cypresses and clumps of bamboo so well adapted that they look as if they grew naturally from seeds planted centuries ago. A secret garden and potager grace the estate’s medieval church, near the castle.

The darling of the five walled outdoor rooms is the rose garden. “The most important aspect in choosing the roses,” says Pejrone, “was their fragrance. They all had to have a strong scent and repeat blooming.” On balmy nights, clouds of attar seem to form above the bubblegum-pink ‘Queen Elizabeth’ and white ‘Iceberg’ parterres. Each of the planted squares bursts with blooms, enclosed by geometrical box hedges. Rosa ‘Paul Neyron’ forms a thick dark-pink layer above the plants with their 6-inch-wide blooms.

When the garden was being created, Guillot, a nursery based in Lyon, France, that has been dedicated to the creation and marketing of new roses since 1834, made a hybrid just for Tenuta Banna and named it Rosa Orsola Spinola® after its owners. The Orsola Spinola® hybrid (a shrub rose with blossoms of silvery-pink) is part of Guillot’s Générosa® collection of “new old roses,” which have an abundance of perfume, blooms, form and color variety. The backdrop to the rose garden is the large-flowered Rosa ‘Mme Alfred Carrière’, which is white when first open, then acquires a pink blush as the blooms age. The abundance of roses in the garden includes those that open quickly and reveal their essence too soon; those which are perfectly spherical at the center with some outer oval petals just flattening out; and others that seem to come from the tulle ruffles of a can-can dancer. “Like a timed performance, the roses finish just before the first snow arrives in November,” explains Pejrone.

Growing these plants and making them bloom in abundance involved many years of horticultural failure. The soil at Banna is solid clay, and nothing except lindens and London planetrees prospered. But with the dedication of many local gardeners working on the estate through the years, the soil improved and new species have been introduced.

Beside the rose garden is another enclosed garden featuring a square stone fountain at the center of a lawn, surrounded by magenta begonias and the crabapple Malus ‘Red Sentinel’; it could be the perfect enclave to fine-tune a sonata. In fact, each year since 2004, the Spinola Banna Foundation has offered young music and contemporary-art students a residency where they can use the gardens as their muse to create new works. “All the parts of the garden are very sheltered, so despite being in a huge estate, you are always in a cozy room,” says Pejrone.

The other three enclosed gardens are designed on a straight line, with autumn-flowering perennials in the English-cottage style, an herb garden and an outdoor room with four linden trees shading a round stone table. There is a purposeful contrast between the umbra of this last room and the large sunny courtyard beside it where an upright and rather stiff bladdernut shrub (Staphylea colchica) with dangling white panicles presides over a bed of white irises and lavender. From the courtyard, one can smell the scent from the blooms of the Southern magnolia in the rose garden perfuming the crisp mornings of spring, while the many apple trees along the walls blossom in shades of pale pink and white.

To the side of the castle is a large, medieval brick structure with an annexed church. Pejrone turned what was once the priest’s kitchen garden into a “secret garden,” planted with Chinese and Japanese wisterias. The collection ranges from the common white and purple Wisteria sinensis to lilac Wisteria floribunda along the wall, with panicles reaching almost 3 feet in length. The wisteria is a great complement to the languorous peonies growing in the beds below, used in flower arrangements around the house. Next to the secret garden, tarragon, rosemary, tomatoes and leafy greens grow in an organic potager, neatly hedged in a diamond pattern. Pejrone turned an old cistern into a fountain, where red, pink and white rose blossoms float across the surface. The back wall of the fountain is covered with a dark-purple clematis, adding vibrancy to the otherwise placid scene.

There is a wilder look to the space between the castle and the church. Here, long, heavy limbs of old trees lean toward the ground, and the grass grows tall. A weeping beech and a 300-year-old London planetree shade a carpet of winter aconites and Scilla siberica, planted some 50 years ago. In ways, this mix of old and newer plants mimics the contrast between the antique buildings and the modern areas of the garden.

“Tenuta Banna is a place full of peace,” says Pejrone. “There are only a few gardeners working quietly in the garden at any given time, never with motorized equipment, so that it almost seems like another century. Banna is a forgotten place, with no sense of time.”