Interior designer Lucien Rees Roberts and his partner, architect Steven Harris, bought an island paradise in Croatia. This is the story of how they, along with landscape architect David Kelly, transformed an overgrown property into an amazing summer home with timeless Mediterranean views. By Lise Funderburg

If you have the good fortune to stumble upon an ancient island paradise—albeit a wildly overgrown, clumsily renovated, and functionally outdated paradise—often the challenge is how to address the property’s shortfalls without obliterating its charms.

Such was the case in 2004 when painter and interior designer Lucien Rees Roberts and his partner, architect Steven Harris, bought this compound located on a small Croatian island about an hour’s ferry ride from the port city of Dubrovnik. The property’s four buildings clustered together at the top of a small hill and dated back to the 15th century, originally serving as a merchant’s home, nunnery, barn, and chapel. By day, the spot offers sweeping views of the Adriatic Sea and mountainous coastline; by night, a swath of sparkling lights from nearby islands and ships pierce the black sky. 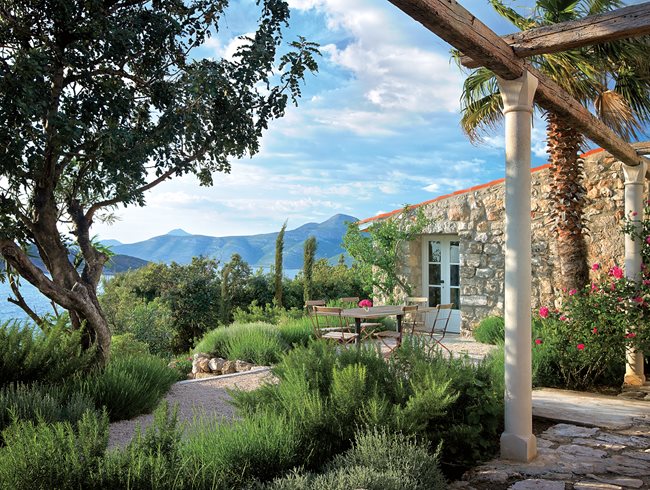 The outdoor dining area, where the couple spends much of their time, is surrounded by a similarly subdued palette made up of rosemary, lavender, and santolina. Photo by: Scott Frances.

Architecturally, the buildings were simple but solid. They had walls almost 2 feet thick, crafted from a dense local limestone, but in the main house there was only one door and one window on the ground floor, giving it a cavelike feel and obscuring the brilliant Mediterranean light. Changes made by the previous owner included wood paneling and concrete interior stairs. Oh, and the plumbing had been ripped out. “It needed work,” Rees Roberts says.

The couple gutted the interior, leaving only beams and joists. They connected the outdoor kitchen to the rest of the house and installed several windows on the first floor.

“Whenever we created a new opening, we had lintels made to match the old,” Rees Roberts explains. “I copied the design from other buildings on the island that were close to the same period.” Where possible, he left interior limestone surfaces exposed, and for the roof, he chose Tuscan terra cotta tiles that had been sandblasted, giving them the patina of age.

In deference to the original materials (and in service to the new owners’ desire for a retreat from their busy Manhattan-based lives), Rees Roberts kept the furnishings understated, from the Dorothy Thorpe 1970s-era Lucite candleholders to the elegant midcentury armchairs designed by Jorge Zalszupin (one of the founders of the L’Atelier design collective). 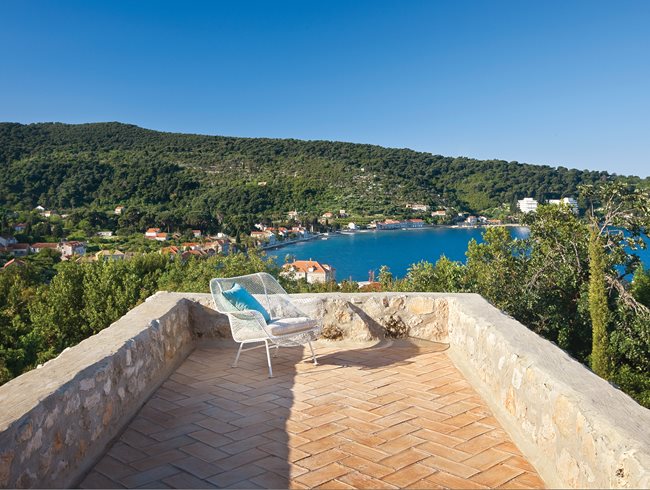 One of several terraces located throughout the garden. Photo by: Scott Frances.

The chapel remains a chapel, but the nunnery was converted into a guesthouse and the barn into Rees Roberts’ painting studio, both refinished with the unobtrusive approach employed in the main house. He replaced the barn’s wooden doors with sliding glass panels, which he leaves open most of the time so he can gaze across stepped terraces out to the sea. That connection from inside to out marks one of the property’s greatest assets, as it has not only views that link its inhabitants to the outside world but also a plentiful series of terraces, courtyards, and gardens that allow for socializing, quiet reading, and outdoor dining. “In summer,” he says, “the outside is really where one wants to spend time.”

First, though, Rees Roberts had to make sense of the slightly feral grounds that wove in and around the buildings, and for that, he enlisted the help of his business partner, landscape architect David Kelly. 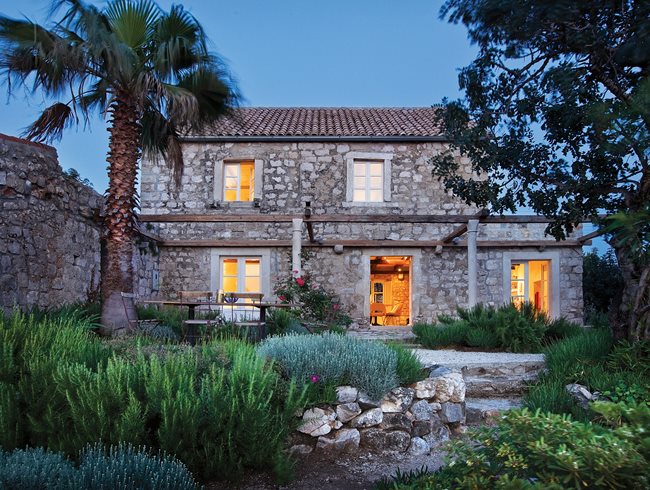 The house has no front door, so one first enters through the outdoor living spaces, granting an immediate sense of relaxation and enjoyment. The topography drops off quickly and steeply around the house, which David Kelly says lends a feeling of floating over the water. Photo by: Scott Frances.

“We began with spaces that already existed,” Kelly explains, “and those were the bones of the garden. But it was overgrown, and we had to do a lot of editing. We also wanted to defer to the view rather than compete with it.” They chose a plant palette of silvers and pale greens to balance the crisp and crystalline reflections off the limestone and the water. When the plants move in the gentle breeze and the sunshine, Kelly says, the undulating sweeps of lavender, rosemary, and santolina are hazy and dreamlike. A small, more formally laid out courtyard of eight orange trees with a reflecting pool at its center is the most self-referential outdoor space, the perfect spot for contemplation and also, given its central location, for people to meet up before heading down to the sea for a swim. Kelly installed outdoor living and dining areas on top of a large cement terrace, covering it with crushed local limestone. To enhance the relationship with the property’s surroundings, he brought a half-dozen pencil-thin cypresses into the landscape, a nod to the surrounding groves of such trees farther down the hill.

While Kelly and Rees Roberts often work with clients outside of the United States, they found that working in such a remote, unspoiled locale had its share of unexpected obstacles. There are no cars on the island that is home to only 140 people at the peak of the summer season. Most of the materials came by the thrice-daily ferry from Dubrovnik, and they were unloaded on the dock and then hand-carried 156 steps up to the house. At one point, a donkey was commandeered to do some of the heavy lifting, but after hauling up one bag of cement, it ran off and repurposed itself as the island mascot.

The day the plants arrived turned out to be during Ramadan. All the workers Kelly had counted on were gone for the holiday, so Kelly and Rees Roberts scrambled to find other helpers from the local village and ended up doing a lot of the schlepping themselves.

“We also planted it ourselves,” Kelly says, “which I don’t typically do, and we really learned about the conditions.” The biggest takeaway? “It’s really rocky,” he says.

The planting took place in October, and when Rees Roberts, Kelly, and Harris came back early the next spring, they were surprised by a sea of red, perfectly dispersed throughout the grounds. It seems the previous owner had a fondness for amaryllis.

“I thought this was supposed to be a silver garden,” Harris said. Kelly was undaunted.

“We cut them all and had the most beautiful flower arrangements,” he says. “And then all the bulbs were removed. But it was good to see them because it confirmed our instincts that strong colors would only compete with the views from the house.”

Growing ConditionsTHE CLIMATE: Proving you can’t keep a good climate down, barely a decade after the war ended in Croatia (in 1995), the New York Times dubbed the coastline-rich country the “New Riviera.” With its glistening sunshine, mild temperatures, and dramatic backdrops of intensely blue seas and steep mountains, travel-wise publications such as National Geographic hailed it as the place to visit. But if you choose to put down roots, literally, as Lucien Rees Roberts and Steven Harris have, you’ll need to plan around the dry heat of coastal Croatia’s hardiness zone 9 summers. This means being water-wise with plant selections and employing patience: Gardens are typically slow to establish in Mediterranean climates.

THE PLANTS: Drought and wind tolerance were the guiding characteristics for selecting a plant palette in the Croatian garden of Steven Harris and Lucien Rees Roberts. 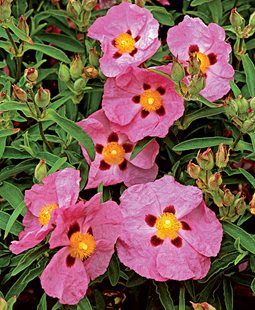 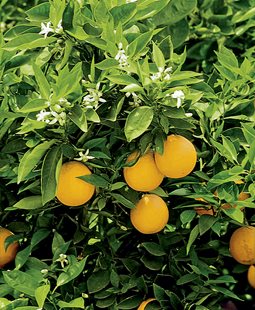 Various species of lemon, lime, and orange trees grow in the more protected areas of the property. 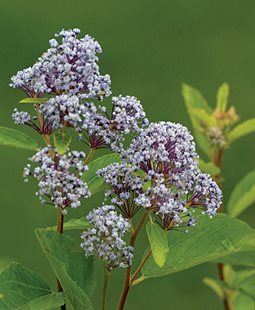 Rosemary fills the air with a rich herbal fragrance and Ceanothus arboreus (feltleaf ceanothus or tree lilac) [left] is a shrub with wonderful blue blooms and dark green leaves. 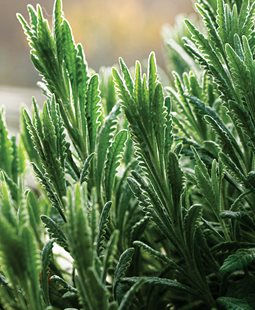 The garden is also filled with aromatic mounds of Santolina chamaecyparissus, with its silvery-gray foliage and yellow button flowers. Many varieties of lavender add to the fragrance and low-growing mounded appeal of the garden.

Lise Funderberg is an editor-at-large for GARDEN DESIGN.